AN Abbeyleix man will drive a motorbike across a frozen lake in Siberia in a chilling world record attempt.

Intrepid adventurer Gary O’Keeffe will co-lead an international team of motorcyclists in a 500-mile journey on ice next February.

Meanwhile, he’ll visit Santa’s home town from 14-16 December, when the world record bid will be officially launched in Finland.

A seasoned world traveller, Gary is well known for his ambition to become the first Irishman to visit all 197 nations on earth. He’s already nearly half-way towards his target, having notched up his 86th nation on a visit to Canada last October.

Gary (46) has been without vision in his left eye since a childhood farm accident. With typical wit, he records his international adventures online under the title ‘One eye on the World’.

Now he is facing his biggest challenge yet as part of ‘The Baikal Project’, as he and Declan McEvoy from Clare prepare to lead an epic journey to one of the most dangerous landmarks in the world – Lake Baikal in Siberia, Russia. 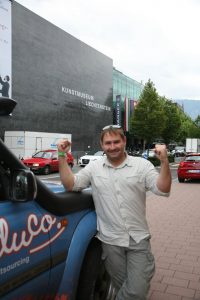 Abbeyleix adventurer Gary O’Keeffe celebrating his arrival in Liechtenstein back in 2015, the 57th country in his bid to visit every nation on earth. Gary will co-lead a team of motorcyclists in a double world record attempt in February 2020, as part of ‘The Baikal Project’ in Siberia

The notorious Lake Baikal, the largest and deepest frozen lake in the world, is over one mile deep and holds nearly one-third of the globe’s freshwater. In winter, temperatures drop as low as -20C by day and -40C by night, but it feels like -60C when you’re driving a motorbike at 80kph. According to locals, Lake Baikal has claimed more than 30 victims to its icy waters below a vast frozen surface.

The Irish-led group aims to set two Guinness World Records by becoming the first team to traverse nearly 500 miles (750kms) of frozen ice on both motorbikes and UAZ 4WD vehicles. They will drive the same distance as from London to Frankfurt, except on ice and in darkness.

Despite or perhaps because of the dangers, Gary is looking forward to an extraordinary expedition that will take three weeks to complete, including eight days on the frozen lake. He is undergoing intensive training with fellow team members from India, South America, UK, Russia and Lithuania.

The double world record attempt, which will start on 10 February 2020, will be filmed by renowned director Claudio Von Planta, whose long list of impressive credits include Long Way Round with Charlie Boorman and Ewan McGregor and Race to Dakar*. It will be produced by Russ Mulkin, whose credits include David Beckham’s For the love of the game. The Baikal film will be ready for broadcast globally in autumn 2020.

A past-pupil of Salesian College in Ballinakill, Gary divides his time between Abbeyleix and Dublin, where he runs a recruitment firm. He’s already deeply familiar with Siberia and Lake Baikal, having traversed the famous 4,500km BAM railway line in Siberia by motorbike back in 2015.

Motorcycle manufacturer Royal Enfield is supplying seven Himalayan motorcycles, full logistics and financial sponsorship for the Lake Baikal expedition. The project is also backed by a variety of supporters that include Rukka Finland Extreme Clothing, Bereg Tents and Adventure Rider Magazine and Web Community, which has 350,000 members and 2.5 millions views a month.

Gary and the team will gather on 14 December in Santa’s home town of Rovaniemi in Finland, inside the Arctic Circle. They will spend three days ice-testing and modifying the Himalayan motorbikes for the Siberian adventure, with the official launch of The Baikal Project set for Sunday 15 December. They will also feature in a promotional video with Santa and his reindeer, organised by local tourist group Visit Rovaniemi, as the countdown begins to an epic journey.