TWO national schools in Laois emerged as county winners in the Someone Like Me national art competition.

The schools at Derrylamogue and Newtown competed in the final alongside 47 other schools and scored very highly.

The fourth annual competition, which was supported by the National Disability Authority, attracted more than 2,600 entries from schools across the country and aimed to raise disability awareness among primary school children and give them a greater understanding of what unites children of differing abilities. 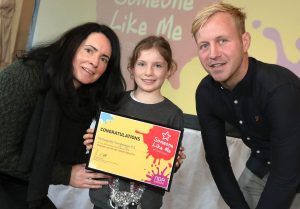 Second class pupils Fia Kempste from Derrylamogue National School was at the awards ceremony where she was presented with a Junior Category County Winners plaque for her entry in the Someone Like Me art competition with Claire Dooley and Paralympian Peter Ryan.
Pic Finbarr ORourke (NRF)

The judges were particularly impressed with submissions from pupils and teachers at Derrylamogue NS and Newtown NS, selecting them as county winners based on their insightful and inspirational responses to the theme.

Congratulating both schools on their achievement, minister of state with special responsibility for disabilities Finian McGrath said that he was hugely encouraged by the growing interest in the competition.

“We are exceptionally pleased with the response to this year’s competition, which illustrates just how willing our primary school teachers and pupils are to help build a more inclusive Ireland, where everyone, irrespective of ability or disability, is treated with equal respect and feels like a valued member of society,” he said.

The competition offers a range of prizes up to the value of €750. It was open to all primary school pupils from junior infants to sixth class. More than 2,600 entries were received from individual pupils, class groups and whole schools. Entries ranged from posters and collages to large sculptural installations and multimedia pieces.