Hina to showcase her paintings at Arthouse expo

AN artist who lived in a direct provision centre after moving to Ireland will feature in the first exhibition of the year at the Laois Arthouse Gallery, Stradbally.

Hina Khan from Pakistan says her experience of living in direct provision had a marked impact on her work. She describes her new exhibition of miniature paintings as “all about human hustle and bustle on the planet and a constant search for peace that doesn’t exist anymore”.

Titled ‘Visible n Invisible’, the Stradbally show will be officially opened by justice minister Charlie Flanagan at 2.30pm on Saturday 11 January and will run until the end of February.

Born and raised in Pakistan, Hina received a master’s in fine arts from Fjwu (Fatima Jinnah Womens University), with miniature paintings as her major. She has conducted several group shows in Pakistan and worked with esteemed organisations such as UNICEF and ICI. She moved to Ireland in 2015 and pursued her career as a visual artist miniaturist. She has participated in several group shows in Dublin, Cork, Laois and Mayo and has had a solo show in Ballina Arts Centre. 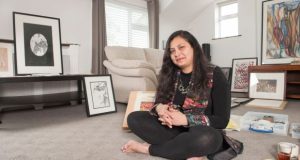 Artist Hani Khan from Pakistan pictured with some of her work

Hina was awarded a Create and Fire Station Residency Award in 2018 at Fire Station Studios in Dublin and also participated in a summer school artist residency at West Cork Uillinn Arts Centre in 2019, taking part in events, seminars and artist talks. She describes her work as a constant search for the best way to interpret ideas and express ideologies through symbolism.

She says: “Human perception can present things very sensitively and for me art is not just an activity, it is a passion. It is a medium that I used as an activist. I use it to describe my feelings and my pain. I have chosen miniature because of its intricacy and delicacy of brush work, which tends their unique identity. Most of my work is a mixture of traditional and contemporary miniature. I am always attracted by the graceful lines, rhythm and depth of colours in a miniature.

All are welcome to attend the opening or to visit the Laois Arthouse to view the exhibition, which will run until Thursday 27 February. For more details, contact Laois Arts Office on 057 8664033/13.