Laois have no answer to Meath’s first half goal-blitz 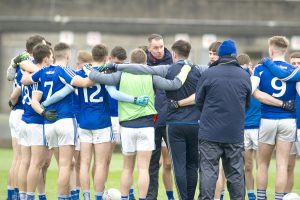 LAOIS footballers were eliminated from the 2020 O’Byrne Cup after suffering a ten point defeat against Meath in Pairc Tailteann, Navan, on Saturday.
Laois struggled to cope with Meath’s intensity in the opening half, as Andy McEntee’s charges operated with a high press, which was causing Laois’s defence all sorts of problems with two of Meath’s first half goals coming as a result of this.
Meath targeted the Laois kick-out and applied pressure to the player receiving possession, which led to two turnovers which resulted in goals. Meath also had runners on the overlap and played a very attacking, exciting brand of football, which may serve them well throughout the league.
Laois certainly have scope for improvement ahead of their first game of the league away to Roscommon in three weeks time. A 12 minute purple patch in the second half was the main positive to take from this game from a Laois perspective which if replicated can bear dividends.
Meath registered three points in the first ten minutes to give themselves an early lead, before Gary Comerford’s effort opened Laois’s account.
Meath went on to register the next four points in succession to stretch their lead to six, before Jack O’Connor scored the game’s first goal with 23 minutes played after a mix-up from a Laois kick-out. One of the Laois defenders lost possession, as Sean Tobin turned him over and Thomas O’Reilly set up O’Connor, who finished to the net.
Meath had another goal three minutes later, with Ronan Ryan palming to the net at the end of an excellent move and things looked ominous for Laois even at this early stage of the tie.
Gary Comerford responded with a free for Laois, before Evan O’Carroll goaled in the 33rd minute after being set up superbly by Michael Keogh.
Shane Walsh landed a 45 for Meath, before the same player found the net moments later when Laois lost possession trying to play out of defence and Walsh made no mistake with the finish.
A free from O’Carroll in front of the posts was the final score of the half, with the Royal County holding a 3-8 to 1-3 lead at half-time.
A Ben Brennan point opened the second half scoring, though Laois’s best part of the game was a 12 minute spell between the 39th and 51st minutes when they scored eight points in succession to reduce a 12 point deficit to a mere four points, with Mark Barry (3), O’Carroll (2), Michael Keogh, Eoin Buggie and Ronan Jones all finding the target.
However, that was as good as it got for them. Meath responded with a goal and four points in quick succession to undo all of Laois’s good work.
The outcome was a forgone conclusion from this stage onwards, with both sides emptying their bench and giving a lot of substitutes a chance.
Laois will now travel to Roscommon for their opening game of the league, while Meath are away to Tyrone.