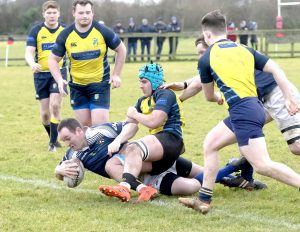 Portlaoise’s Robin Cooper crashes over to score a try just minutes after being brought on as a replacement during the Hosie Cup Final Photo: Sean Brilly

PORTLAOISE RFC first team have had a few barren years but this season have seen something of a revival in their fortunes. They have won six of their nine games in Division 2A of the Leinster League and lie in joint second place.
That said when they headed to Cill Dara Rugby Club to take on Clondalkin in the Hosie Cup final they knew their opponents were plying their wares a division higher in the Leinster League. Nor has Portlaoise’s record against the Dublin club been particularly impressive in recent times.
Played in simply horrendous conditions with close to a gale blowing across the pitch this was never going to be a game for the purists. However, both sides did attempt to play decent rugby and ran the ball when possible.
Portlaoise played with the aid of the wind in the opening half but it was Clondalkin who dominated both possession and territory. It was only the fact that the Portlaoise defence stood solid for the opening half hour or so that ensured no scores were conceded.
Portlaoise were however conceding a lot of penalties and were fortunate that the windy conditions made life very difficult for the Clondalkin, and former Portlaoise player, Andy Tyndall who missed a number of shots at target.
The deadlock was eventually broken with 27 minutes on the clock. From a ruck on the Portlaoise 15 metre line the Clondalkin scrum half broke wide and his inside pass to centre Darren Madden caught the Portlaoise defence off guard. Tyndall was wide with the conversion.
And with half time fast approaching it looked that that would be the only score of the half. But there was to be a twist. Portlaoise were coming more into the game and a long clearance found touch deep into Clondalkin territory.
There followed a series of line outs and scrums and from one scrum Robin Foot broke and fed Mark Sherlock to crash over for a try two minutes into injury time. With John Scully landing a magnificent conversion from out close to the sideline Portlaoise took a 7-5 lead into the break. 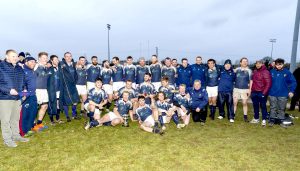 Despite playing into the wind Portlaoise went on to play most of the second half in Clondalkin territory. From the kick off the Clondalkin winger knocked on the ball but from the scrum Portlaoise did likewise.
It was now a Clondalkin scrum and at this stage Portlaoise introduced Ross Cooper. In the ensuing scrum Clondalkin were pushed backward and in the ensuing ruck possession was turned over and Cooper, on the pitch less than two minutes, crashed over for a try. Unfortunately Scully’s conversion clipped the upright.
Now it was a case of maintaining what you have and ensuring Clondalkin did not get in for another try. The Dublin club did have their moments but all in all they never seriously threatened the Portlaoise line.
In truth it was Portlaoise who always looked the more likely to add to their tally and they did just that with five minutes of the game remaining. From a five-metre defensive scrum the Clondalkin outhalf’s attempted clearance was partially blocked down. The ball flew into the air, was gathered by Portlaoise prop Paddy Cross who in turn barged over for a try.
The final whistle blew shortly after and the Hosie Cup was on its way back to Togher and this was no less than this team deserved.
Probably one of the most pleasing aspects of this victory was the fact that it wads achieved with a number of younger players in the ranks. This has been a bit of an issue in recent years but with the young talent on show and with more coming through hopefully Portlaoise have turned the corner.

Laois GAA step in and cancel games from tonight