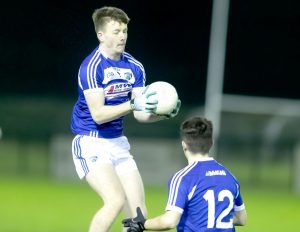 KILDARE ran out comfortable winners against Laois in the first round of the John Kerins Cup at Hawkfield on Saturday evening.
Conditions on the first Saturday evening of the new year were surprisingly pleasant and aided both teams as they went about their business but it was the home team who possessed the sharpest attack on the night.
Laois were the winners when the two teams met in the Under-20 Championship last year but based on this display, it is Kildare who will go further in this year’s championship.
Shane O’Sullivan was the star on the night and although seven of his eight points were frees, he was constant menace to the Laois defence from open play as well.
Kildare had the edge after the first 12 minutes and led 0-3 to 0-2 with O’Sullivan (2) and Steed on the score-sheet for Kildare with Dean Brophy and Damon Larkin pointing for Laois.
The visitors then went ahead again when Damian McCaul was sent through on goal and he confidently past Matthew Anderson in the Kildare goal.
That lead was quickly wiped out by two O’Sullivan frees and Kildare then took charge when a high, hanging Findlay Nairn shot was palmed down into the goalmouth where James Behan quickly pounced to fist home from close range.
From that moment on, Kildare took charge. They led 1-9 to 1-4 at half time and only conceded three points in the second half.
Laois, though, could have got goal in the opening seconds of the second period when half time substitute Ross Bolger worked his way through the Kildare defence but having done the hard work couldn’t get the requisite contact on his shot to really trouble the Kildare goalkeeper.
Nairn was also close to a goal at the far end but Kildare did get their second goal with 21 minutes remaining when Adam Steed shot home. As well as the goal, the St Laurence’s man also impressively kicked three 45s during the game and could have scored a second goal late on when his shot rebounded off the post.
Among the second half substitutes for Kildare was Aaron Browne, the star of the 2019 Leinster Minor winning team who was making his return in a Kildare jersey after a hand injury kept him out of Celbridge’s run to the county Under 21 final in the latter part of last year.
Kildare still have a number of their stronger players to return, including captain DJ Earley, and they face Dublin in Hawkfield on Saturday at 2pm in their next game in this competition.

Laois GAA step in and cancel games from tonight