Liam Cully has been painting in his unique style in a small studio space provided by the hospital during his residency at the department of psychiatry for the past eight years.

Rev Tarleton, who is the Church of Ireland canon of St Peter’s Church Portlaoise, The Holy Trinity at The Rock and St John the Baptist Church, Ballyfin, had organised carol singing with members of his congregation at the hospital where he met Liam.

Canon Tarleton, who raised thousands of euro, for the Éist Cancer Support Centre in Carlow by climbing Mount Kilimanjaro in Kenya on his 70th birthday in July 2016, offered to display ten of the artist’s paintings in St Peter’s Church, Portlaoise. 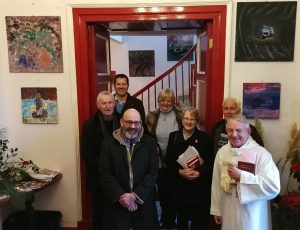 Some of the attendance at the opening of the exhibition, included (back) Harry Ince, David Graham, Phyllis Clegg, Elaine Little and David Clegg; (front) artist Paul Swan and Canon Peter Tarleton

Canon Tarleton said: “We are absolutely delighted to have discovered Liam. He is very talented. The church wanted to give him space to display his first solo exhibition and we are delighted that we are able to do this for Liam.”

Yorkshire native Paul Swan was artist-in-residence in the Killeshin Union of Parishes for several years when they were under Canon Tarleton. Launching the exhibition, he said: “The minute I saw Liam’s work, I was delighted to hang the exhibition and to take on the job of introducing it.

“Liam’s style is typically known as outsider art or brut art. It can seem primitive or even brutal, but its beauty is straight from the heart. It is visceral, real and this exhibition is Liam’s own beautiful truth.” he said.

Speaking at Portlaoise hospital, Liam said: “I am delighted to have met Reverend Peter. I want to say a big thank you to everyone involved in displaying my first-ever solo exhibition. I really love painting and plan to do a lot more now that I have my health back. I can’t wait to get myself an apartment with a studio so that I can concentrate full-time on my artwork. I hope everyone who goes along to view my paintings like them. I have buyers for some of the paintings already.” he said.

Liam was a member of both Edenderry Motorcycle Club and the Irish Parachute Club, where became Ireland’s youngest skydiver at the age of 16 in 1980.