A LAOIS man who invented the world’s first plastic-free recyclable coffee cup has criticised the government for its plans to introduce a latte levy of up to 25 cents on single-use coffee cups.

Tommy McLoughlin, whose fully recyclable Butterfly Cup is used in 20 countries, said that the emphasis on consumers using reusable cups is “flawed”.

“Buying just one cup of coffee a day will cost consumers €91.25 a year, with no incentives for retailers to switch to environmentally-friendly products,” he said. 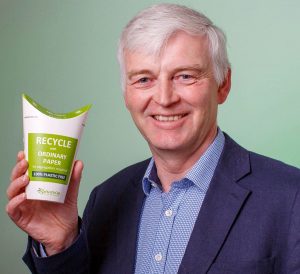 Mr McLoughlin added that the levy should apply to cup manufacturers and suppliers, not consumers, in order to promote the use of environmentally-friendly products.

In a submission to environment minister Richard Bruton, Mr McLoughlin said: ‘Many reusable cups are made from plastic or composite materials that have a significantly higher environmental impact than recyclable products. Research shows that it can take between 20 and 100 uses for a reusable cup to offset its higher greenhouse gas emissions compared with a disposable, due to the greater amount of energy and material required to make a durable product and the hot water needed to wash them. The reality is that people often dispose of these cups before that.’

Minister Bruton proposed the levy in November to push coffee drinkers towards reusable cups and plans to introduce it this year following public consultation.

The Butterfly Cup is made entirely of paper board, developed in Finland from renewable forests, which can be recycled with mainstream paper waste such as newspaper and cardboard. The cup can hold hot and cold beverages, has a spout which eliminates the need for a plastic lid or straw and is designed to prevent splashes, leaks and drips. It can be used more than once, in the same way that many people reuse plastic-coated cu