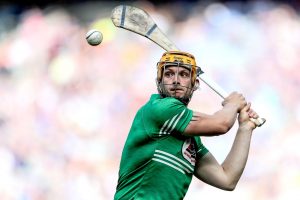 LAST year Enda Rowland was not just one of Laos’s outstanding players, but won of the most outstanding players in the country. His performances earned him an All Star nomination and a place on the 27-strong panel which travelled to Abu Dhabi to partake in a five-day PwC All-Star hurling tour. He was joined on the tour by Laois team-mate Paddy Purcell.
It cannot have been easy to come back from the heat and the sunshine and get back into training in Ireland.
“Before Christmas, it was hard coming home and getting back into the swing of things but when you get back into it you nearly forget what happened last year and you look forward to the year ahead. As soon as I got home, I focused on the year ahead and you don’t want to be thinking what went on the year before and you’re trying to get back to the same level you were last year, that’s the main goal,” said Enda on Sunday morning.
So how enjoyable was last year?
“It was probably the most enjoyable we’ve had in a Laois jersey. We got the goal we wanted and then beating Dublin was unbelievable, that’s something no Laois person will ever forget. I suppose it’s no good though unless you make it a norm for Laois every year. When you get a taste for Croke Park you never want to leave it, you want to be there every year.”
Then there was the day in O’Moore Park when Laois beat Dublin. The game was replayed on TG4 over Christmas.
“I was sitting down with the family on New Year’s Day watching it actually, it’d bring a tear to your eye thinking back about it. It got a buzz going again and you were made to get back into it. If we get more days like that and make it a norm, it’s where Laois hurling needs to go.
“We need to play the same way we did against Dublin and if not better every day we’re out this year. They’re the games you want to be in, the stand in O’Moore Park will have 9,000/10,000 in it. They’re the games you want to be apart of, the teams we’ll be playing and testing yourself against the best.”
These are busy times for Enda between county and college (Fitzgibbon Cup).
“I’m only in goals, I’ll be alright. What other way would you want it, the main reason you train is to play games and the more games you play the better you get. I love playing games anyway.
“It’s all about man-management as well, everyone knows their own body and if you need to take a break, Eddie and the boys are very accommodating. You just have to mind yourself, the last thing you need is to get injured and missing games. I suppose knowing you’ve the work done and backing yourself to go and do that, just managing yourself and knowing what you can and can’t do.”