Panthers pounce on the Wildcats 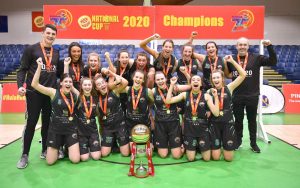 The Portlaoise Panthers team celebrate with the cup after after winning the Hula Hoops U/18 Womens National Cup final against Waterford Wildcats at the National Basketball Arena on Friday Photo: Brendan Moran/Sportsfile

PORTLAOISE Panthers were crowned Hula Hoops U/18 National Cup champions at the Arena in Tallaght Friday evening as they won out 76-53 over Waterford Wildcats in a dominant display.
MVP Gillian Wheeler led the charge, with a big double double display of 19 points and 10 rebounds, and she had a strong supporting cast around her, with Sarah Fleming and Lisa Blaney key scorers on the day. Hannah Collins and Jasmine Burke were big under the boards for the Panthers. Despite a standout display from Wildcats’ Bami Olukayode, as well as good work from Sarah Hickey, Portlaoise just had too much for them in the end.
In a energetic first quarter, Portlaoise came out on top as Gillian Wheeler’s early seven points helped them race into an 8-3 lead. A timeout by Tommy O’Mahony helped settle the Wildcats team and they started to find better opportunities for Sarah Hickey and Bami Olukayode.
Each Wildcats score was met with an immediate response with Ciara Byrne and Lisa Blaney both getting excellent scores. As the quarter drew to a close Wildcats were starting to struggle more with Portlaoise’s zone press and had it not been for the energy of Olakayode the deficit could have been more than nine (20-11).
Sarah Hickey’s influence was growing in the game to start the second quarter but Portlaoise were being the more efficient team as they finished at a higher rate around the basket. As the game approached the halfway point of the quarter a beautiful fast break move was finished off by Sarah Fleming as Wildcats again had to call timeout to try and stem the tide as they now trailed by 14.
A lifeline was given to Wildcats as Sarah Hickey hit a big three to get the lead back to single digits but the Panthers again responded through Byrne and Burke. Portlaoise’s ball movement was creating problems and they were punishing their opponents with clinical finishing around the basket. At half time the lead was up to 17 points (42-25) with the Panthers in complete control.
As the second half started Portlaoise again extended their lead through the powerful combination of Wheeler and Fleming. Olakayode scored a big three but, like many of the big scores from Waterford, it was met with an instant reply from Portlaoise. Midway through the quarter Gillian Wheeler hit her second three of the game, taking her total to 18 points as the Panthers lead extended to 27. By the end of three quarters, not only had all 12 of the Portlaoise players been in the action, but they also had a commanding 62-34 lead.
The final quarter saw Wildcats continue to fight and show some of the ability that got them to the final. As the clock ticked down in the fourth Jack Dooley continued to rotate his players as ten of his team got on the score sheet.
Captain Ciara Byrne kept the ball moving as she racked up an impressive seven assists. In a team performance worthy of a National Cup win, it was hard to isolate any individuals but MVP Gillian Wheeler deserves particular mention for her outstanding display.