Basketball – All Ireland U/19 ‘A’ Girls Schools Cup Final 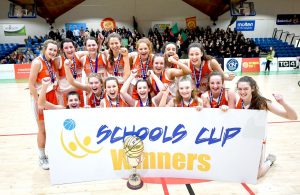 SCOIL Chríost Rí put in a dominant team performance at the National Basketball Arena in Tallaght on Wednesday afternoon to be crowned All Ireland U/19 ‘A’ Girls Cup champions, as they stormed home to a 70-38 point victory over Our Lady of Mercy Waterford.
Ciara Byrne scooped the MVP award for the game, behind a 15-point display from the talented underage star, but there were standout performances from all over the roster for the Portlaoise school, with Shauna Dooley also putting in a 15-point display, Grainne O’Reilly landing key scores, and Jasmine Burke dominating under the boards.
At the other end, Kate and Sarah Hickey were the two main scoring threats for Our Lady of Mercy, combing for 26 points on the day, and great performances from Tara Freeman and Illana Fitzgerald were also one of the talking points.
However, it was Scoil Chríost Rí who dominated from the off, opening up a 21-10 point lead at the start of the first quarter and they didn’t look back from there.
A big opening quarter saw Byrne to the fore almost immediately as she knocked down the opening five points for Scoil Chríost Rí, including a big three-pointer to get them off the mark. Scores from Kate Hickey and Fitzgerald and Niamh Corcoran kept Our Lady of Mercy’s scoring ticking over, but as the midway point ticked past, it was Scoil Chríost Rí who were in control, with Shauna Dooley coming off the bench and bagging six consecutive points, while Jasmine Burke closed the quarter strong, to see them into a 21-10 lead.
The second quarter was firmly in favour of Scoil Chríost Rí, with Sarah Fleming, Dooley and Grainne O’Reilly all knocking down big scores for the Portlaoise side. Good work at the other end from the Hickey sisters, including a big three pointer from Kate, was followed up with a closing three pointer from Fitzgerald, but Scoil Chríost Rí still held a solid cushion going in at half time, 35-18.
A closer third quarter followed, as Our Lady of Mercy upped the defensive pressure, trying to close down the multiple scoring threats for Scoil Chríost Rí. Dooley and Byrne came into their own in this quarter though, and were involved in almost every score, while Burke made some nice scores under the boards. It was the Hickey show at the other end meanwhile, with Sarah hitting six points in the quarter, while Kate and Fitzgerald were also on hand to deliver some well-taken three-pointers, but Scoil Chríost Rí were still firmly ahead going into the last, 51-30.
A massive fourth quarter from Scoil Chríost Rí saw them outscore Our Lady of Mercy 19-8, as they dominated at both ends of the floor, with Fleming, Amy Byrne and Dooley all getting in on the action early on. Great work from Faith Umeh and Rachel Glynn off the bench saw them land some great scores. Despite solid work from Freeman and the Hickeys at the other end of the floor, the Portlaoise school just had too much firepower, and won out in style, 70-38, in the end.