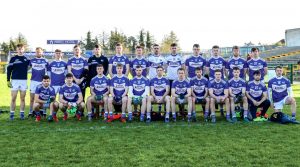 The Laois team which drew with Roscommon in the opening round of the Allianz National Football League Division 2 in Dr Hyde Park on Saturday Photo: Paul Dargan

SENSATIONAL equalisers from James Durcan and David Clifford were the talk of the country late on Saturday night, but if the TV cameras happened to turn up at Dr Hyde Park on Sunday afternoon, Evan O’Carroll and Kieran Lillis would be just as much a topic of conversation this week.
With Roscommon 2-13 to 0-13 ahead and injury time looming, it looked as if the big-game experience and know-how of the home side had been enough to guide them over the finish line. In most aspects of general play, Laois had been able to match their high profile opposition, only to be undone in a couple of key moments.
Twice wing-forward Niall Kilroy picked out a gap in behind the Laois full back line, twice he ghosted in there and twice it led to a goal, the first from his own boot and the second from the penalty spot, with Mark Timmons shown a black card for good measure.
Laois had enjoyed the lion’s share of possession throughout the contest, building on the very solid platform established by John O’Loughlin and Seán Byrne at midfield, but they struggled to convert that into scores at the same rate as Roscommon, and consequently they fell off the pace over the course of the second half, when they failed to kick a point from play after Lillis’s effort in the 39th minute.
Yet there was to be a twist in the tale. Evan O’Carroll’s class shone through at all stages of this contest, to the point that some supporters might even have forgotten about absent friends from down around the Carlow border, and he produced a moment of magic that would be worthy of a GAA equivalent of the Puskas award. Out of nothing, he fired a thunderbolt of a shot from nearly 25 metres into the top corner of the net, and suddenly there was just a goal between the teams.
On the next play, the Crettyard man hammered over a long-range free from out on the right wing and while Roscommon did have another chance to put the game away, substitute Noel Gately didn’t spot his colleague Cian McKeon drifting in at the far post and instead shot himself, blasting it over the bar as Niall Corbet narrowed the angle.
A lifeline, then. 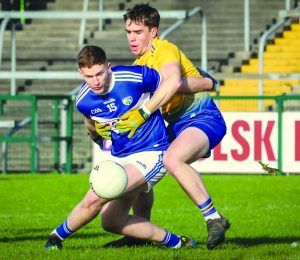 In the modern era, when the sport is all about tactics, innovation, and buzzwords like “transition” and “recycling”, Laois went back to basics, or as generations of terrace regulars might describe it, they “leh id in”.
A free from Ross Munnelly was dropped into the Roscommon penalty area and once the home side failed to control it at the first attempt, Lillis as able to seize the break and then use all his power and strength to find a half a yard of space and slam the ball to the net. Cue scenes of jubilation, repeated a minute later when Down referee Ciarán Branagan sounded his final whistle to confirm the result.
Had the O’Moore County come away from this game empty-handed, they would have felt hard done by. They controlled the game in the first half, particularly at midfield where John O’Loughlin and Seán Byrne were dominant, with Kieran Lillis also alternating between roles in the centre and on the edge of the square.
Laois also made excellent use of the mark, with Lillis, O’Carroll and Colm Murphy all converting scores that way in the opening 35. Roscommon did look sharp up front when they got good possessions and both Smith brothers made a strong impact on the game, but they had to be efficient as they spent long spells of the half on the back foot, only taking the lead when a superb pass from Brian Stack put Niall Kilroy through on goal, and the finish matched the quality of the pass.
1-7 to 0-9 at half time became 1-10 to 0-10 and it looks as if the Rossies might pull away after the break, but instead they lapsed back into some sloppy play and a series of turnovers in the Laois half of the field cost them scoring chances.
Ross Munnelly came of the bench to kick off his 18th season of competitive intercounty senior football and he added two scores to keep Laois in touch, before again a run from Kilroy seemed to make the game safe.
He darted through the middle, picked up a pass from Cathal Cregg, and once Mark Timmons dragged him to the ground, it was an easy call for Branagan to stretch his arms wide for the penalty and to give Timmons a black card.
Enda Smith blasted a perfect penalty to the net, followed up with a fine point from play, and when Hubert Darcy added a free, it was 2-13 to 0-13 and the serious business seemed to be done and dusted.
It wasn’t.