WHEN Sharon Shannon arrives at a school, an unforgettable seisiún is sure to follow.

So it was at Abbeyleix South NS, when the hugely popular traditional musician joined students for a memorable day of ceol, craic agust gáire on Friday 17 January.

The world-renowned performer, who has played at venues across the USA, Canada and Europe to Asia and Australia, is an icon at the Abbeyleix school, where music classes have enjoyed listening and responding to her recordings for many years.

The visit came about after third- and fourth-class pupils did an extensive study of Sharon’s best-known tunes, which they followed by writing to the musician herself.

Sharon kindly responded with an unexpected message to the school on Facebook, when she described the letters as “so, so sweet” and offered to visit to perform with students. 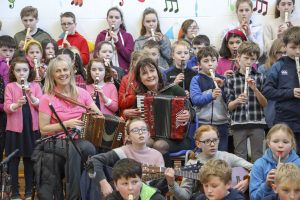 It was an exhilarating morning as children awaited the arrival with handmade banners of welcome. Students, teachers and parents lined the avenue to the school, as Sharon and her team greeted everyone amid screams of excitement.

The hall was brightly decorated for an amazing day of music, with all classes from junior infants to sixth class performing with Sharon as she played some of her best-loved tunes. Students who are members of Spink Comhaltas also enjoyed a seisíun with their famous visitor.

In Mrs Wallace’s room, Sharon met pupils who wrote the letters that captured her heart. Children asked questions, took photos and obtained treasured autographs, while two youngsters also had a chance to play individually with her.

After a day that created very special memories, Sharon was presented with a basket of rose-shaped cupcakes from Wendy’s Cakes as a token of appreciation for her kindness in devoting so much time from her busy schedule to meet some of her youngest and most fervent fans.