IT was never going to be easy and that was how it panned out at MW Hire O’Moore Park on Saturday night. A week after picking up the Walsh Cup Wexford were back for more and, fielding a very strong outfit, Davy Fitzgerald showed how his side are hell bent on building on last year’s success.
Laois, on the other hand, were coming in off the back of a poor Walsh Cup campaign. Short several first choice players Eddie Brennan was hoping for a decent performance and in fairness, fielding several in experienced players, they tried but soon found themselves out of their depth.
After Wexford were wide in their first raid Laois responded with a Ross King point but the lead was short lived and the sight of the O’Connors firing over points at ease was a warning of what was to follow. Laois drew level after King set up Aaron Bergin and he landed a great point five minutes in.
Then the O’Connors fired over another brace to edge there side back in front but both sides were to be guilty of poor shooting. Paul Morris became the third member of the visiting side to get his name on the score sheet after 14 minutes.
Laois then produced a great move. As the visitors were clearing their lines Stephen Bergin robbed a defender and picked out his club mate Willie Dunphy who was fouled but continued his run and beat the keeper from 20 metres out.
From the puck out Conor McDonald landed a point but at the other end Laois were awarded a free which Enda Rowland drove between the uprights. The next four points were shared between Ross King and John O’Connor from placed balls.
James Ryan edged the home team in front with a good point from play after 24 minutes and Ross King extended the lead. Liam Óg McGovern next put his name on the score-sheet from play. At that stage Laois were a point in front and three minutes time added on was announced.
In that period the game was turned upside down when three goals were recorded. The first saw John O’Connor, who was lording matters in middle of the park, pick out Conor McDonald who attempted to go through Ryan Mullaney but that was not going to happen. He then blasted low past the keeper but the referee had indicated for a free in and issued a yellow card to the Laois defender. After loud protests instead of a free the referee awarded the goal.
From the puck out John O’Connor again fetched the ball and raced towards the sideline from where picked Anthony Nolan who blasted beyond Enda Rowland.
Laois were in shock but were thrown a lifeline from Enda Rowland whose massive puck out caught his opposite number cold. Mark Fanning saw the sliotar bounce out of his hand and over the line. The score board read Wexford 2-10 to 2-8 and Laois would have been happy enough with their first half but Wexford had struck ten wides. What difference the wind made to Laois was debatable but it certainly played a big part in the Enda Rowland goal. 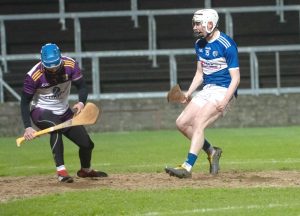 Ross King opened the second half scoring from a free but two in a row from Wexford defender Kevin Foley, both from frees, saw four points divide the sides after 42 minutes. Laois were still in the game but they hit a few bad wides before Conor McDonald extended the visitors’ lead with a sublime point followed by another name on the score sheet, this time by Aidan Rochford from the corner.
Cathal Dunbar entered the fray and posted a point on his arrival and when Rory O’Connor was on target six points separated the teams with 20 minutes remaining.
Ross King broke the sequence of Wexford scores from play but a great point by Shaun Murphy restored the visitors’ advantage. Two more Wexford points followed until King again broke the sequence but Cathal Dunbar, who is excelling in the Fitzgibbon Cup with IT Carlow, added to his account as did Paul Morris.
Eddie Brennan began to empty the bench and young James Keyes showed his confidence firing an early point while two in a row by King left eight between the teams with time almost up. That was as good as it got as Wexford sub Seamus Casey closed the scoring with a point from a nonsensical free leaving 11 points the margin.
After a bright opening start Laois finished a well beaten side by the Leinster champions who will be contenders for more honours this year. Some crumbs of consolation for manager Eddie Brennan, he would have watched his own county hand out a similar lesson to Laois’s next opponents, Dublin at Nowlan Park 24 hours later.