Brennan proud of the way his players applied themselves 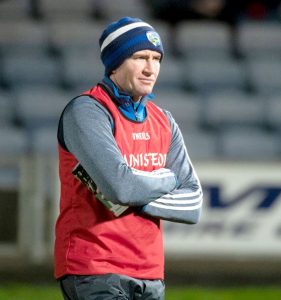 IT is never easy to accept an 11 point defeat but Laois manager Eddie Brennan wanted more to concentrate on the positives and what could be learn from this game than actually losing.
“We expected nothing less. I thought there were so many aspects of it (game) that we did really well at times, we punched really hard. Two big moments came just before half time (Wexford’s two goals), we got one of them back, Enda’s long-range goal, so that sort of balanced the books,” said Brennan.
But really it was those goals that put that bit of daylight between the sides, so were they the killer goals?
“They were, because we were after putting in a lot of work. We had got off to a really good place, we were really in that match. The two lads inside were really causing a lot of problems for Wexford. We were getting good supply and the ball was sticking. “We struggled in the first ten minutes to deal with all this running that Wexford go on with, but after while we settled down and started playing our game. That was the big thing. We responded well, we took a few big hits. You’d have to say Wexford’s shooting was off tonight as well.
“It was very much like the Dublin game in the Walsh Cup. From minute 58/59 we were gassed out. But that’s this time of the year. You are looking at a Wexford team that are superbly conditioned and that’s the level we need to get to.
“They have a system that they stick to. It involves a hell of a lot of movement, they work very hard but you’d say they’re radar was a bit off there tonight. They’re Leinster champions, they’re Walsh Cup champions, they have designs on where the All-Ireland is going to go this year. You look up and admire where they’re at and that’s where we need to be.”
But Brennan knows that playing teams of this calibre will only improve Laois.
“There was massive learning there for us tonight. When you have the top four, the teams that are contesting All-Ireland semi-finals coming to your patch you’re going to have it tough. You’re not going have it easy. For me we pull the learnings out from that and we tidy them up.”
The fact that there are a number of ;layers missing from last year the manager had to bring in a number of new lads. How did he feel they coped?
“Look we’re a bit thin on the ground and that’s the nature of it. Equally the match was used to blood a few fellas. I’d be very happy, Stevo (Bergin), James Keyes, Liam Senior had a good match, Alan Connolly got in for a bit of time, Fiachra (Fennell) got 70 minutes under his belt – that’s what it’s all about. It’s important because come championship we could well be needing all these guys so it’s important that they adapt to this level.”
So all in all, how would the manager sum up the games and the players’ performance?
“You’d be fiercely proud of the way the lads applied themselves tonight. We knew there were going to be periods of the match where you’d be going around with your tongue hanging out. After the initial ten minutes I thought we settled in really well and we played the match on our terms. That is key at this level, to lay the game on your terms,” he said. “All in all I’m happy with it. Yeah, we could have been a little bit closer but it is what it is.”