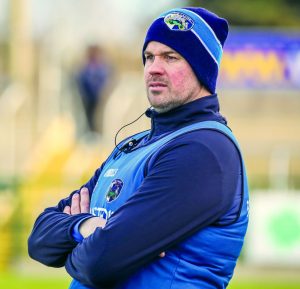 MIKE Quirke was a happy man when he came down to meet members of the press after Sunday’s game in Dr Hyde Park, understandably after his charges rescued a point that looked long gone against one of the favourites for the Division.
As the Kerry man began to reflect on the game, it was clear that he was not just happy about the result, but also about how it could be the start of a change in the tone of conversation when it came to Laois football. Absent players had dominated the airwaves and the bar stool chats over the winter, but Quirke made it clear on a couple of occasions that the time for that type of talk was done now.
“We were fortunate to get something from (the game), but I thought our play in the first half deserved a lead instead of sending us in a point down. Over the whole course of it I thought we played well enough to get something out of the game, but there’s a lot of stuff in the second half that you wouldn’t be happy with” he said.
“We’ve obviously lost some players, but I’ve said it from the start, we’ve a lot of quality there, there’s guys that are very proud to pull on the Laois jersey and play for their county. Roscommon were Connacht champions, a Division 1 team and in the Super 8’s last year, so they were obviously a big challenge.
“There’s guys in there that are very committed and want to play. We have high calibre guys who are great leaders and good footballers. Maybe people mightn’t know about that all over the country, but if they put in a few more performances like that, people will start to learn about them.”
Quirke hailed some of his younger players and league debutants, but he also appreciated the contribution that some of his senior players were able to make, particularly up against some high profile Roscommon players.
“We probably lacked that little bit of cleverness in the attacking third and he (Ross Munnelly) gave us that when he came on,” he said. “Kieran Lillis was a monster scoring 1-3, John O’Loughlin was tackling everybody, Enda Smith wasn’t his usual self because of the job that Robbie Pigott did on him, Gearóid Hanrahan came back after a few years and had a massive game in the full back line, there were loads of guys all over the field who stood up for us.”
So – a sign of things to come?
“I’d be very confident that we were going to compete, and today hasn’t changed my thoughts on that. I think everybody’s a bit too focussed on the guys that aren’t there instead of the fellas that we do have and the work they’re doing. Nobody’s getting carried away with a point but this was a very tough start. Coming up here to this ground, with the quality of opposition, was a statement of intent. These guys are very comfortable at this level and are going to try and stay there at the very minimum.
“It’s very early days, but any point you get away from home, especially in Division 2 which is one of the most competitive leagues in all four, we’ll be more than happy to take that.
“A six-point turnaround would have been great with 15 men on the field, we did it for the most part with 14 men. We’re going to have lulls and difficult periods because we’ve gone up a level, but there’s plenty there to drive on and improve in every game” he concluded.