Battling Laois just cannot match it physically with the Dubs 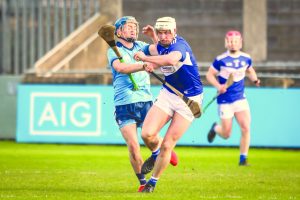 LAOIS were right in this game up half time in Parnell Park on Sunday but once the hosts reappeared they quickly ensured the win would remain on home soil. Just two points separated the sides at the break but within three minutes of the restart the hosts had struck for two goals effectively killing off the game. Credit to Laois they never gave up the chase and battled gallantly right to the final whistle but never looked like springing a surprise.
What was very obvious from this encounter was that size does count. Laois in general fielded a young team who were never going to be able to mix it physically with a more mature Dublin outfit.
It was so obvious with the way the Dublin full forward line totally dominated the Laois full back line while at the other end the opposite ensued.
With the very strong wind blowing in gusts diagonally across the pitch it was never going to be easy hurling. Dublin had the wind in the first half but in some ways it was more of a hindrance than a help.
Hat said, the way the home team started the signs were looking ominous for Laois who had the first scoring opportunity but Enda Rowland’s long range effort in the opening minute tailed wide.
A minute later Dublin free taker Oisin O’Rorke found the target and did likewise from a 65 two minutes later. That 65 came about after Rowland brought off a magnificent reflex save to deny O’Rorke. Further points from O’Rorke (free) and Donal Burke gave Dublin a four point cushion seven minutes in. Burke’s point came about after Rowland brilliantly deflected Danny Sutcliffe’s shot out along the end line.
Laois looked to be in serious trouble after O’Rorke picked out Eamon Dillon totally unmarked in front of goal and he drove low to the corner of the net.
Laois clawed their way back into the game with four successive points from Ciaran McEvoy, a super score from out close to the side line, Aaron Dunphy, Ross King (free) and a brilliant effort from Stephen Bergin.
A brace from Sean Moran and O’Rorke were matched by Willie Dunphy and Jack Kelly with a spectacular first time strike on a King pass.
That left two between the sides with 19 minutes played and two minutes later the sides were level. Laois worked the sliotar out of defence to Aaron Dunphy who let fly only to Dublin keeper Sean Brennan get his stick to it but the sliotar flew in Willie Dunphy’s direction and he buried it in the net.
Seconds later Paddy Purcell split the posts from distance to give Laois the lead for the only time in the game with 22 minutes on the clock. Two further O’Rorke frees edged Dublin back in front and the gap was two after 33 minutes when Sean Moran’s long distance free found the target.
An equally impressive Enda Rowland free brought it back to the minimum but Dublin finished the half stronger with Jake Malone and Donal Burke points to lead 1-11 to 1-8 at the break.
Ciaran McEvoy had Laois supporters cheering landing a point just 30 seconds after the restart. But those cheers were swiftly cut short as O’Rorke and sub David Keogh twice rattled the Laois net.
Laois replied with a brace of points from Ross King and James Ryan but even with 44 minutes gone it was goals Laois need and they never looked like materialising.
Moran and King swapped points before Ronan Hayes pounced for Dublin’s fourth goal.
Laois kept battling away and were to land points through King (2), Stephen Bergin and Eoghan Gaughan but they were making no inroads into Dublin’s lead who matched each score.
There was some little reward for Laois when Willie Dunphy crashed his second goal to the Dublin net and with Ross King rounding off the scoring with a late free.
We all accept this leaguer campaign is going to be a huge learning curve for Laois and while they have accounted admirably in the opening two games things are not going to get any easier especially with a trip to Ennis in two weeks.