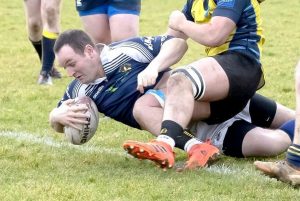 TWO first-half tries for Portlaoise proved to be the difference as they overcame a dogged North Kildare side in Togher on Sunday afternoon to get their Leinster League campaign back on track.
Good form prior to the Christmas break saw Portlaoise climb the table into third spot. The subsequently boosted their confidence by defeating Clondalkin in the Hosie Cup final but since that their league form plummeted when going down to Newbridge and Wexford.
Both sides were mindful that nothing less than a win would suffice and were aggressive from the off and it led to North Kildare having a man sent to the bin after just two minutes for a high challenge. Portlaoise took advantage of their numerical superiority and almost had a try only for Brian Flannery to have his effort held up on the line.
From the resulting scrum, Portlaoise got their first points on the board as Darragh McAuley went over under the posts for the game’s first try. Mike Newbolt kicked the conversion.
Five minutes later, Portlaoise got over the line yet again as a super pass from Michael Dowling allowed Armand Smit to break the North Kildare line. Smit then offloaded the ball to Ross Cooper and he touched down for the home side’s second try. Newbolt made it two from two as he pointed the conversion.
Portlaoise had made the most of the North Kildare sin-binning as they ran over two tries in the ten minutes that their player was off the field.
North Kildare spurned a big chance for a try only for them to knock on the ball and award a scrum to Portlaoise. However, North Kildare did get over the line for a try as their number eight got their first points on the board. They were unable to point the resulting conversion.
Portlaoise almost got in for their third try but for their effort to be held up on the line for the second time in the match. The home side were awarded a penalty in the 28th minute for a deliberate knock-on and Newbolt took his kicks to three from three as he split the posts with the kick.
Portlaoise now led the game 17-5 as they showed a ruthlessness in the first-half. They would however end the half with 13 men as Simon Williams and Smit were both sent to the bin within two minutes of each other.
North Kildare made their advantage count as they took a quick free-kick which took Portlaoise by surprise as they got over for their second try of the game. They made sure of the extra two points as they slotted over the conversion.
The sides went into the break with five points between them on a scoreline of 17-12 in favour of Portlaoise.
The second-half was nip and tuck as both sides battled hard and made crucial tackles when they were were needed. Portlaoise would receive another sin bin in the 56th minute as Newbolt was sent for a ten minute break.
Portlaoise playing with one less man got over for their third try of the game as a perfect line out set up Cooper to get over and touch down. Michael Dowling was on kicking duty with Newbolt off the pitch, but was unable to score the resulting conversion.
The game fizzled out from here with North Kildare scoring a penalty after the 80th minute as Portlaoise ran out ten point winners and now rest in third place on the table.