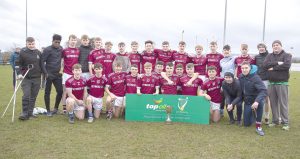 HEYWOOD snatched a late victory from the jaws of defeat with three points in the last 10 minutes at the O’Hanrahan’s grounds on Friday afternoon to claim the South Leinster senior football ‘C’ title.
They led early on and controlled the game until half-time. Tullow bounced back just before the half-time break but a couple of injuries in the second half saw the Laois school take control.
Finding themselves a point down going into the last minute, Heywood emerged victors. It was a tight game throughout with neither side able to seize the initiative and kick on. Indeed it was a game of few chances with both sides matching each other throughout. In the end, it came down to who made the least mistakes.
Heywood took the lead two minutes in through Eoin Simms but Aaron Bolger equalised two minutes later, coming in from the left-hand side. A couple of frees for Odhran Delaney put some distance between them and the Carlow side.
However, a couple of mistakes handed the initiative back to Tullow and former Wexford Youths underage player Brian Byrne made no mistake in slotting them over to bring things back level.
Delaney and Conor O’Neill exchanged points to leave the game level again. The Laois side almost took the lead again just before half-time when Dylan Cuddy found himself through on goal but a good block from Fionn O’Gorman kept Tullow in the hunt.
He was rewarded for his efforts when Byrne nailed a free from the right-hand side to give them a one-point lead going into the break. 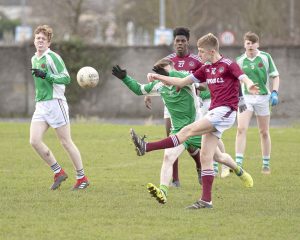 They continued where they left off after the break as O’Neill put one over from the right-hand side to push the Carlow side into a two-point lead. However, such was the story of the match, Heywood weren’t out of the game for too long and Delaney sent over another couple of frees to bring things level again.
However, they failed to kick on and made another couple of fouls which led to Byrne restoring the Carlow side’s two-point lead.
Cathal O’Shaughnessy pulled back a point with a cracking effort from the right sideline. Tullow replied through Cillian Fagan but that would be their last effort of the game.
An injury to key man Pauric White midway through the half saw Heywood take advantage despite Fionn Holland being sent to the line for a black-card offence. O’Shaughnessy pulled a point back before Brian Whelan went close to levelling things again but he drew a good save from Kieran Orbinski in the goal.
Heywood eventually did level things through a late Delaney free two minutes from time. Paraic Deering was taken off injured for Tullow in the dying moments and Heywood took advantage through another Delaney free to give the Laois side the title.