Laois ease to the top of standings with polished performance 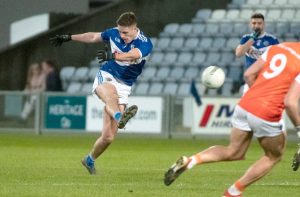 ARMAGH arrived in Portlaoise on Saturday trying to play down the hype surrounding their one sided victory over Cavan a week earlier. But once they took to the field before a big crowd of their own followers there was no hiding the fact they were warm favourites to claim a second victory in seven days.
Laois ensured they would not get carried away and soon brought them down to earth. It was of course the feast day of St Brigid the patron saint the local diocese and to celebrate the occasion Laois proceeded to give one of their best performances in years after a slow start.
Evin O’Carroll opened the scoring early on and then proceeded to torment the visitors for the remainder of the game until he was replaced by Darragh Connolly just before the end of the game.
Armagh full forward Rian O’Neill levelled matters but Laois replied with points by Michael Keogh and newcomer Brian Byrne from Graiguecullen who travelled all the way from the full back line to make it three to one after eight minutes. What a debut in front of the home supporters.
Midfielder Niall Grimley responded with a second Armagh point after 11 minutes but incredibly they would not bother the umpires again until early in the second half.
Laois took complete control adding points from Mark Barry, Evin O’Carroll before the other Graiguecullen defender, Mark Timmons took off from the full back line to put his name on the score sheet.
A hardened former Laois footballer summed it up well when he remarked ‘in my day you wouldn’t get out of your own square playing Armagh not to mention scoring at the other end’.
Evin O’Carroll brought his tally to four points as Laois were in complete control and might have been further in front at half time, 0-8 to 0-2, were it not for some wides. They might also have had a goal but they were happy enough heading to the dressing room.
What Kieran McGeeney was thinking is anybody’s guess but he certainly was not smiling. On the return he had replaced a second forward, Mark Shields was withdrawn eight minutes before the break now Jason Duffy was replaced by Jarlath Óg Burns.
Eoin Lowry continued his rich vein of form with an early point on the resumption from a free.
Armagh suddenly then sprung to life and versatile full forward Rian O’Neill showed his qualities firing over four unanswered points, the first from play then three from placed balls. Laois responded with two in a row by Mark Barry on the left and from the other side O’Carroll made it 0-12 to 0-8 after 48 minutes.
Next up substitute Joe McElroy was lucky to escape with just a yellow before in the 53rd minute Armagh looked to be in for the goal they craved. With keeper Niall Corbett committed a Laois defender cut out the danger with a great intervention.
Evin Lowry was then sin binned bringing more pressure but O’Carroll calmed nerves with an excellent point while Corbett brought down a great Armagh attack reaching over the crossbar with ten minutes remaining. Laois began emptying the bench and Mark Barry split the uprights leaving the hosts leading by six with eight minutes remaining.
Armagh sprung Jamie Clarke and he marked his arrival with a well kicked point from a placed ball. At the other end the O’Dempsey’s man Mark Barry fired over not one but two superb points with three minutes of normal time remaining. Laois introduced Cahir Healy and he made one fine interception as Armagh went in search of a goal. A late free saw Jamie Clarke add to his tally and although Armagh never gave up there was only going to be one result.
While Mike Quirke will be pleased but he knows perusing other results yesterday morning there is no consistency in this group.
Last week Cavan were threshed by Armagh, then the Orchard get robbed on their travels but Cavan at home and playing with 13 for most of their game against Westmeath stormed to victory in the closing minutes. Now the Kerry man prepares for the arrival of the Breffni blues on Sunday next.