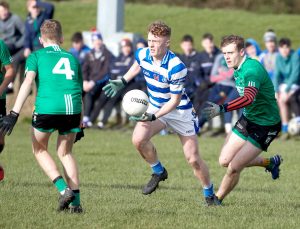 Knockbeg’s Patrick Regan on the attack

KNOCKBEG College’s Leinster ambitions came to an end in Graiguecullen on Wednesday last as Mullingar CBS overcame a six-point half time deficit to force extra-time and advance to the next round.
Aided by a stiff breeze in the opening half, Knockbeg College went in at the break leading 1-5 to 0-2 with Ian Shanahan accounting for the goal. With the wind advantage reversed, Mullingar CBS clawed their way back and equalised in the fifth minute of injury-time through a Ben McGauran point to send the game to extra-time.
The Mullingar school had more left in the tank for extra-time and it showed as they held Knockbeg scoreless in the first period, and to just three in the second period all while notching five themselves to snatch the win.
Knockbeg got off to a flying start and led 1-2 to no score inside the initial five minutes. Fionn Bergin and Ciaran Burke landed early points either side of a fortunate Ian Shanahan goal that dropped into the Mullingar net from range.
Mullingar CBS gradually found their footing in the game and kicked the next two points. Full-forward Ben McGauran opened their account with a super point from the left flank and Kevin O’Sullivan followed to leave the margin at a goal with ten minutes played.
Although they would trouble the Knockbeg goalkeeper Craig Doyle and force two brilliant saves, the travelling school failed to add another score for the remainder of the half.
Despite dominating the possession, Knockbeg’s accuracy evaded them in the final third of the field and they only kicked three more points in the half, all from the menacing Colin Dunne, to lead 1-5 to 0-2 at the interval.
Mullingar CBS instantly put their stamp on the half ahead with a goal inside the first minute from Fionn O’Hara’s rifled free. By the 45th minute they had turned the tables and held a two point lead in Graiguecullen.
McGauran was in full flight at this stage, kicking five points in the 15 minutes after the restart, while Colin Dunne kept Knockbeg ticking over by adding three more to his tally.
Knockbeg chipped away at Mullingar’s precarious lead and Ross Bolger’s free five minutes before the end levelled the sides to ensure a nervous finish.
Dunne and McGauran went on to trade frees before Ian Shanahan looked to have edged the contest for the men in blue and white stripes, but there was to be late drama as McGauran fired over the Knockbeg crossbar five minutes into injury-time.
McGauran and substitute Shane Williams gave Mullingar a two-point lead at half time in extra-time, but it could have been more had it not been for the heroics of Doyle in the Knockbeg goals.
McGauran exchanged fire with Bolger, Shanahan and Patrick Regan in the final stretch of the game, but Mullingar CBS held firm to seal a memorable and hard-fought win.