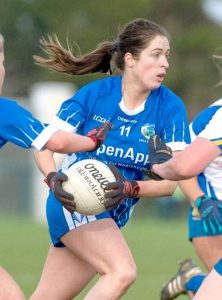 Mo Nerney scored an incredible two goals and eight points against Roscommon on Sunday but even that was not enough to secure Laois their first National League win of the year Photo: Denis Byrne

LAOIS will have to wait at least one more week for their first win in this year’s Lidl LGFA league, or the first competitive win of Donie Brennan’s tenure as manager, following last Sunday’s defeat to Roscommon at Kiltoom.
The nine-point winning margin might suggest a comfortable win for Roscommon, but Laois were competitive for long spells of this game, ahead at half time on a score line of 1-9 to 0-8, only falling away in the final quarter.
Opening with a strong wind at their backs, Laois started quickly and in the first minute had a point from play from Eva Galvin followed up by the first of Mo Nerney’s six frees.
Roscommon responded with two points of their own before Nerney added her first point from play off her left foot in the sixth minute. Yet Laois struggled to shake off the Rossies, and were only on level terms coming up to the quarter-hour mark.
Great inter play between the Erone Fitzpatrick and Nerney ended with a shot that was looping into the net until the Roscommon keeper made a good save, keeping the home side in the game and giving them a boost that led to two further scores.
Roscommon struggled to contain Laois full forward Erone Fitzpatrick, who was thriving on the supply of ball from her half forward line colleagues. Fitzpatrick drew a series of frees that Nerney dispatched clinically to give Laois a solid foothold in the game.
A brace of dead ball scores brought Laois level, before the decisive moment of the first half arrived in the 23rd minute, Nerney scoring a goal for Laois following impressive play from Caoimhe Simms and Fitzpatrick.
Roscommon answered this with a point from Sinéad Glennon after great work up the left wing, but it was the visitors who had a real spring in their step and they kicked on with three more scores before the break.
That left Laois four up with 30 minutes of difficult football into the wind to play, and it was clear from the restart that Roscommon came out of the dressing room a different team.
They scored with their first attack of the half through Jenny Higgins, executed a crucial defensive play when Kate Whelan was dispossessed just as she was in on goal, and then moved the ball up the pitch to create the opening for teenager Aimee O’Connor to score their opening goal.
Roscommon now hit their stride and O’Connor scored another point following a great run up the middle of the pitch from player of the match Laura Fleming. Four points in as many minutes followed for the home team, and by now Laois were finding it hard to win the ball in the full forward line. The Rossies struck a huge psychological blow when Laois were forced to move Erone Fitzpatrick outfield, removing her from her role as the focal point of the attack.
With Roscommon’s Laura Fleming now running directly at the Laois defence, the chances started to flow and a second goal arrived in the 47th minute through Fitzmaurice.
Laois replied in kind almost immediately with a super finish from Nerney but from there to the finish it was all Roscommon who eased over the line while controlling the territory and possession.