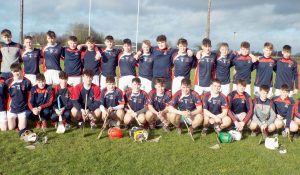 MOUNTRATH Community School produced the performance of a lifetime to reach the Leinster Senior Hurling ‘B’ final at windswept James Stephens Park on Saturday last.
Making their first appearance since their hard fought quarter-final before Christmas, Mountrath looked hungry from the throw in aided by the bitterly cold breeze. They fired over three early points courtesy of Adam Kirwan, Dan Delaney and Tadgh Cuddy.
Ferrybank opened their account with a point by full forward Ian Byrne, that was after the Mountrath keeper made an excellent save to deny the Waterford side a goal 11 minutes in.
Two minutes later Adam Kirwan picked up a puck out on the right wing, ran across the pitch and from 20 metres he billowed the Waterford net for a superb score. Mountrath followed with a wide before Ian Byrne posted his side’s second point again from a free.
Mountrath were in control at this stage but hit two bad wides before Dan Delaney added his second from a free. Midfielder Josh O’Brien Holmes sent over a point from distance with six minutes remaining in the half.
Facing a strong breeze on the resumption Mountrath needed more scores and Mountrath goalie, Finnian Cuddy delivered a long ball to Noah Kirwan and he split the uprights for a great point.
Ian Byrne replied but a minute before the break Mountrath produced a great move. Aaron Phelan called for the puck out, then picked out the unmarked Tadgh Cuddy. The Castletown man soloed past two defenders and hammered the ball high into the roof of the Waterford net.
In the remaining minutes Mountrath defender Gearoid O’Neill made a brilliant block to deny Waterford a goal at the expense of a free and a yellow card but the usually reliable Ian Byrne saw his effort drift wide.
At half time Mountrath were in a commanding position leading 2-8 to 0-6 but facing the breeze on their return. Still their management must have been happy with their display only conceding one point from play.
Mountrath went on the attack immediately from the restart but a free out was awarded. Their second raid saw Tadgh Cuddy set up Jer Quinlan for a good point from an acute angle. Ferrybank hit two wides in succession and a goal bound effort was denied by the Mountrath keeper. Eventually Ferrybank opened their second half account with a well struck point by Rory Furlong after 38 minutes.
A great Mountrath move saw Jer Quinlan feed Dan Delaney and the bustling Camross man split the uprights at the pavilion end to leave his side nine points clear after 40 minutes. Mountrath were taking control adding two great points from Tadgh Cuddy and substitute Tomas Keyes.
Ferrybank needed goals but the Mountrath defence were superb and Dan Delaney converted a free with six minutes remaining. The sides swapped points Tomas Keyes with his second and for the ‘Bank midfielder Keith Butler replied but time was not on their side.
Ferrybank finally got the goal they craved after a harsh penalty was awarded and Ian Byrne blasted past the Mountrath stopper in injury time. Before that Tomas Keyes and Ian Byrne had traded white flags.
The final whistle was greeted with delight by Mountrath but manager Christy Coughlan warned his charges it is still only half time but this was a fine performance by the boys in black and red.