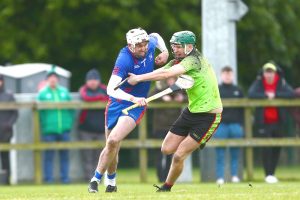 IT Carlow manager DJ Carey hailed the character of his team on Saturday after they booked their place in the Fitzgibbon Cup final in fine style at the DCU Sportsgrounds.
Having trailed Mary Immaculate College, Limerick by two points heading towards the third-quarter mark, the Barrowsiders produced a stunning goal blitz to comfortably advance into tomorrow’s (Wednesday) decider against reigning champions UCC.
Stephen Bergin, Liam Blanchfield, Cathal Dunbar and Mount Leinster Rangers man Chris Nolan all found the net in the closing stages to halt the progress of their southern counterparts.
“This game was nip and tuck the whole way along. We got the couple of goals that made the difference. You won’t always get them. I suppose they broke for us in the second half today. We’re delighted, we’re thrilled,” the legendary former Kilkenny marksman acknowledged.
“Delighted for the college and delighted for these lads, because they wouldn’t have the highest profile in the competition. They’re a small IT and it’s brilliant. We’re coming off the back of the footballers getting to the final. You can say, okay, we got well beaten [in the Sigerson]. But at the end of the day, it’s a massive achievement getting to the final as well.”
On a weekend when Storm Ciara was wreaking havoc across the nation, both sides had to contend with a powerful cross-field breeze throughout.
Carlow seemed to make light of the elements early on as Jerry Kelly supplemented a brace of points for inside forward Seamus Casey to give them an early cushion. While they were on top during the opening exchanges, Mary I inevitably worked their way into contention.
Shane Ryan brilliantly split the posts from play on the left-wing and the reliable Cathal Bourke converted a 65 to reduce their deficit to the bare minimum. Kilkenny star Richie Leahy fired over a superb point on the run to reinforce Carlow’s authority, but the Mary I challenge gathered pace through Bourke (two) and Gary Cooney contributions.
They later claimed back-to-back points in response to a monstrous Enda Rowland effort, only for Carlow to strike for their maiden goal on 22 minutes. From an extremely tight angle on the left-hand side, Dunbar brilliantly fired beyond the reach of Jason Gillane.
With netminder Rowland landing his second point of the tie, Carlow looked set for a strong end to the first half. Leahy subsequently chipped in with another single but after Bourke hit four scores in the space of five minutes, Mary I brought a 0-11 to 1-7 lead into the interval.
Casey hit two points without reply on the resumption before their Limerick rivals once again enjoyed a purple patch. Following another Bourke free, the imposing Tim O’Mahony’s 0-2 salvo put the two-time champions in the driving seat.
Yet when substitute Bergin scooped home in the 45th-minute just moments after his introduction to the field of play, it reignited IT Carlow’s prospects. Within 60 seconds of the Laois man’s close-range finish, Blanchfield squeezed a shot into the bottom right-hand corner of the Mary I net.
This sudden burst offered Carlow a four-point advantage and it was soon extended to seven thanks to the exploits of Casey (two) and Nolan. This show of defiance left Mary I shell-shocked and their only score in the final quarter was O’Mahony’s tap over free on 56 minutes.
In response to this white flag effort, Carlow amassed 2-2 without reply to ultimately seal their place in the college hurling show piece. Dunbar delivered another powerful finish past Gillane, but it was fitting Rangers star Nolan had the final say with their fifth goal in stoppage-time.
IT Carlow will have to immediately dust themselves off for the gargantuan task of dethroning the competition’s holders at the same venue. Though they won’t have a great deal of time to prepare, Carey pointed out it is a better scenario than their previous final appearance in 2017.
“It’s a four-day turnaround. But when we played in the final three years ago it was a one-day turnaround and we only barely got lads on the field. So we’ll take the four days!” Carey added.