IT’S been a long road for one-time chimney sweep Brian Stanley from his first foray into politics to his meteoric rise last weekend, when he topped the poll in the general election.

The Portlaoise-based TD began his political career in 1994 with a handful of party members contesting the local elections for a place on Portlaoise Town Commission. On that occasion, he just missed out on the last seat when he was pipped at the post by the late Joe ‘Hesh’ McCormack. 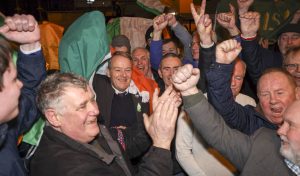 In 2011, he once again threw his hat in the ring for the general election and was returned to the Dáil as a first-time TD, retaining his seat in the following election in 2016.

But last week he surpassed all previous achievements by topping the poll on the first count, exceeding the quota by 5,083 votes.

Speaking to the Laois Nationalist over the weekend, deputy Stanley said: “I’m delighted with the vote, when you consider where the party first started out from, when we were on about 1% of the vote, to where we are now. It’s really down to hard work, dedication and a thriving organisation we have now in Laois. We also have a revised party in Laois that helped us out greatly.

“What we found going around the constituency was that people were concerned about jobs in their area, housing and health. One of the biggest issues was health. People are waiting three and four years for basic health services.”