THERE is anger in Rathdowney following the destruction of a plaque commemorating Thomas Prior, one of Ireland’s greatest educators and innovators.

In a statement condemning this act of vandalism, Laois Heritage Forum said: “To the person who took a hammer to the Thomas Prior commemorative plaque in Rathdowney, congratulations, your parents must be very proud.”

Former county councillor John Bonham, who was instrumental in having the plaque erected, was equally scathing of whoever carried out the attack.

He said: “It’s sickening, to tell you the truth. The plaque was erected to remember a Rathdowney man who had gone on to great things.

“There are many historical plaques and statues erected around Laois celebrating the great people and places in the county. What next? … somebody tying a rope around the neck of the statue of James Fintan Lalor in Portlaoise and pulling him down off the plinth? 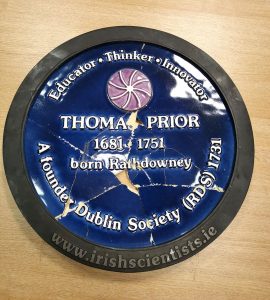 Other locals took to Facebook to express their abhorrence at the motiveless destruction, with one woman commenting: “Anti-social activity in the town is gone beyond a joke. It shouldn’t be instantly assumed it’s kids or teenagers as there are some young adults about, that don’t have a moral compass.”

Laois Heritage Forum assured: “We will replace the plaque which remembers the contribution made to science, the arts and humanitarian causes by the Rathdowney native. The plaque is part of a series erected nationwide to remember the men and women of science.”

Thomas Prior was born in Rathdowney and educated in Kilkenny College and at Trinity College Dublin.

In 1729, Prior published his List of absentees of Ireland, in which he condemned absentee landlords, named those he considered delinquent and garnered himself some notoriety in doing so.

He subsequently devoted himself to economic promotion, working among the Protestant population in Ireland. In 1731 along with Samuel Madden and 11 other friends, he established the Dublin Society for the Promotion of agriculture, manufactures, arts and sciences. In 1749 it received a yearly grant of £500 from parliament and in 1820 it became the Royal Dublin Society (RDS).

Thomas Prior died on 21 October 1751 and was buried in Rathdowney. A monument was erected to his memory in Christ Church Cathedral, Dublin with an inscription in Latin Societatis Dubliniensis auctor, institutor, curator.

The plaque was erected on the wall of the Church of Ireland building in The Square, Rathdowney about four years ago.