PORTLAOISE is about to create a buzz with plans for a massive biodiversity project on the new circular road.

More than 5,000 trees and plants will feature in one of the largest projects of its kind in Laois and even in Ireland, according to Portlaoise Tidy Towns secretary Vincent Booth.

The Portlaoise Southern Circular Road (PSCR) biodiversity project will see thousands of trees and plants along the roadside with wildflower meadows, hedgerows, native trees and shrub planting. Green ivy-covered walls, ornamental pollinator-friendly planting beds and a managed bee bank will also enhance the new verges and roundabouts, in what the creators describe as “an innovative and exciting new way” of looking at roadside verges.

There will also be a number of pollinator themed art/sculptural installations to follow in the next phase of the plan. 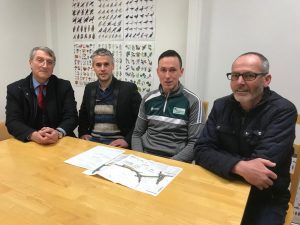 Portlaoise Tidy Towns devised the project in conjunction with Laois County Council and Laois Partnership, with the aim of making Portlaoise ‘A Town in a Garden’.

Mr Booth explained: “We aim to become more pollinator friendly and this project will prove a significant step in that direction, as we are actively engaging with the All-Ireland Pollinator Plan.”

Since the extension linking the Abbeyleix and Timahoe roads opened late last year, the PSCR has become a very popular walking route. The project intends to erect two water stations along the route, with educational signs regarding the types of native Irish pollinator plants and shrubs used in the planting schemes.

Portlaoise-based landscape architect Brian Gaynor of Green Pine Consultants is the chief designer and has been appointed project manager. Local firm Absolute Landscaping, led by John Burke, successfully tendered for the works, which will start before the end of February, weather permitting.

Mr Browne added: “This project has been a team effort from the start and it will prove to be a very worthwhile one for the environment and the town, as we see these plants and trees growing and maturing over the years. This can act as a template for other   Tidy Towns groups in the county to get their verges and hedgerows pollinator friendly.”