A TALENTED schoolgirl is following in the footsteps of her hero Greta Thunberg as she challenges politicians to ‘go green’ before it’s too late.

Gaby Hutton (12) from Killeshin takes a leaf out of Greta’s book, as she expresses her ideas and fears in a compelling poem called Climate Change.

A sixth-class student at Killeshin NS, Gaby loves writing and is passionate about the environment. She decided to channel both passions into a powerful poem, which captures the urgent challenges of global warming.

In copperplate handwriting, the poem begins:

Our world was once a beautiful place

But global warming is winning the race

Sometimes I wonder do politicians care

What we are doing to our ozone layer.

We put you in power to lead and protect

The four-verse poem goes on to highlight the widespread destruction of forests, which has a devastating impact on animal habitats and oxygen levels. It also explores the alarming increase in global temperatures, which has led to melting ice-caps and increased flooding. 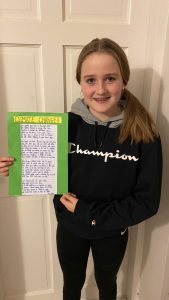 Gaby’s poem appeals to everyone to play their part in protecting the environment, whether by rejecting single-use plastics, recycling more or using less heating and motor fuel.

Our animals will die, never return,

When will mankind ever learn?

So I ask politicians in countries so great

To reverse climate change before it’s too late.

I ask every person to listen to Greta

And make our world a little bit better.

A daughter of Obbie and Natalie Hutton, Gaby lives with her parents and teenage brother Tommy. Another relative was so impressed by the primary school student’s work that she sent the poem to the Laois Nationalist for publication.

Although busy preparing for her confirmation, Gaby does everything she can to protect the environment and she hopes her poem will encourage others to do the same.