The event, which was organised by Laois Chamber of Commerce, attracted around 2,500 people, as employers and employees sought to strike up positive working relationships.

Companies such as Supermac’s, Glanbia Cheese, Nuvo, Greenfield Global and Enva set out their stalls, as did CJ Sheeran and Fingleton White, together with staff from Solas, the governing body for apprenticeships in Ireland. 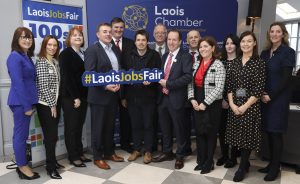 There was also a separate area housing several co-working hubs, which are becoming increasingly popular throughout the county, as well as interview rooms for jobseekers and employers.

Speaking after the event, Laois Chamber of Commerce chief executive Bernie Everard said: “I am really overwhelmed by the response. Everybody from employers to employees spoke so positively and the great thing is that real connections were made and jobs are expected to be offered. For example, Supermac’s, which is opening its new Portlaoise Plaza on Junction 17 in May, has 120 roles to fill and is confident of securing a sizeable number of these from connections made at the jobs fair. Also, several interviews have been set up, with many reporting that they have already identified possible matches for positions they had been struggling to fill.

“The one thread that ran through the reaction from companies was the quality of the jobseekers. They were so impressed by them and so many said they were truly blown away by their experience, track record and professionalism.

“Laois has enormous potential, with employers and employers both needing the links that were made at the jobs fair. People are fed up with long commutes impacting on their quality of life and employers need the calibre of workers they met. It’s a win-win for everybody,” added Ms Everard.

Erin Hooban, human resources manager with Enva, was just one of the attendees who could vouch for the difference working and living locally has made to her life.

“I was on the road with my job for years; I was constantly driving and it did take a toll; I was married to the N7. I am so delighted to be able to work and live locally. This Laois Jobs Fair has totally exceeded my expectations; the calibre of the jobseekers we met today was excellent.”