THE Mountmellick-based Laois Martial Arts club began the New Year as it ended the last … winning.

Things got off to a flyer when fighters travelled to Citywest just outside Dublin to compete in the New Years Open and brought home a haul of 14 trophies ‒ three gold, six silver and five bronze.

The eight-strong team competed in both light contact and point fighting competitions throughout the day.

Five-year-old Peter McInerney secured second place in point fighting. This was followed by a massive bout, which earned him another second-place finish in the under-5 light contact competition.

At six years of age, Abygail McPartlan won two first-place medals in both categories, which saw her become a double champion. 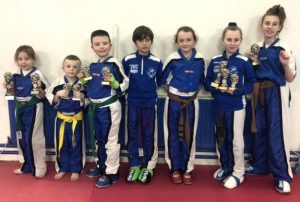 Completing the club’s Pee Wee team was Julia Dillon, who was taking part in her third major event. She came away with an impressive second place in point fighting and a bronze in light contact.

Next up for the Laois team was Caitlin Knight and Cian O’Brien, who competed in both categories. The pair put in superb efforts and came away with some useful experience.

The club’s head coach Shane Culliton said: “We do not aim to come away with medals when we compete; rather, to put on a consistent performance and always trying to improve from our last event.”

Hannah Reinhardt took to the mats next for what turned out to be a great day of competition. She picked up three top spots ‒ first place in intermediate point fighting, a runner-up spot in advanced point fighting, and third place in light contact.

Aodhan Sherwin rounded off the day for the club. He competed in four fights and came away with two second-place finishes.

Shane Culleton said: “The team has so much talent and they are great athletes who sacrifice so much to compete on the national circuit. I am so proud of all their hard work and dedication.”