Kinsella happy his charges are where he wants them to be 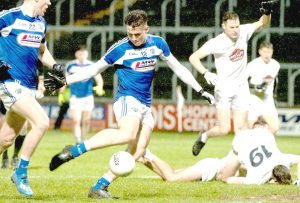 LAOIS manager Eddie Kinsella wears his heart on his sleeve and lives every moment which occurs on the field. Speaking after the game, Kinsella praised his side’s performance although he admitted it wasn’t pretty to look.
“It was good, it probably wasn’t pretty to look at but I’m happy we got there in the end. I’m over the moon, I’m so happy. We came together eight or nine weeks ago and our main target was getting to a Leinster final,” he said.
Kinsella pondered whether this was the time for championship football given the weather conditions.
“We had two massive games against Westmeath and Kildare. Each game the conditions were worse than before and it’s terrible hard, I’m not sure whether it’s championship football time.”
Kinsella was full of praise for his panel of players and stressed the importance of having a large panel.
“What can I say about the players, great chaps, they’re brilliant. I haven’t only got 15 players, I have 34 players in there with me and the effort they’re putting in to get into a Laois jersey is phenomenal.
“We only had four days (since Westmeath game), there’s nothing we can do, I’m not going to stand here and whinge about it. We just got on with it.”
After the excellent start Kinsella said: “We wanted to mind what we had. I think that’s what won it for us, the first 15 minutes against the wind. The coach Mickey talked about us being against the wind. To be fair, the man is an expert and we’re all delighted with him, myself Padraig, Seamie and Johnny. We had the lads all geared up for this, they were in great form going out and we got the result we wanted that’s the main thing.”
This was a more controlled performance than against Westmeath.
“It was very controlled and even with the wind we weren’t going to get carried away, we had four points of a lead and we didn’t want to change how we were playing. Everything worked tonight for us tonight and I’m so happy.”

After scoring in the penalty shootout against Westmeath and also scoring the goal against Kildare, Damon Larkin received praise from Kinsella regarding his last two games.
As for individual performances Kinsella said: “I don’t like singling out any individuals. I thought they were all brilliant and our backs they were brilliant in the first half. The lads who came in were good tonight and even the lads we took out were good too. It was hard on the legs there with a four day turnover. We needed the panel tonight.”
Wrapping up Kinsella said: “We’re where wanted to be, playing against Dublin or Meath in two weeks time. I don’t care if Dublin and Meath were joined together we’re going to give it a right go.
“I’ll go home now and I’m going to ask the missus now if she wants to go shopping tomorrow, somewhere near Parnell Park.”