‘There was no way that match should have gone ahead’ – Brennan 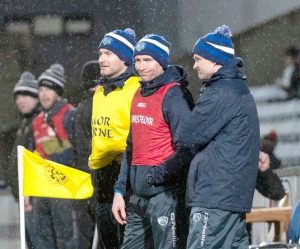 ON what was a crucial day for Laois hurling it seems incongruous that Laois manager Eddie Brennan should be discussing the weather and rather than concentrating on the performance of his players.
Brennan was emphatic that the NHL game against Carlow in MW Hire O’Moore Park on Saturday evening should not have gone ahead. Having experienced a horrendous out in Ennis a week earlier he was of the opinion that the pitch was unplayable this time around.
This was no fault of the O’Moore Park grounds-men. The pitch was hosting its fourth game in a week and after a week that hardly saw any let u in the rain it hardly came as a surprise that the pitch cut up badly.
“You’d be disappointed, for me there was no way that match should have gone ahead,” said Brennan. “That pitch was in awful condition and I suppose I’d be somewhat apologetic to Carlow that we ended up playing the match like that.
“That is not a grounds-man’s fault. Mother Nature intervened all this week. That pitch, to have it in the nick (it was in), Colm McEvoy (grounds-man) did some job. In that regard, maybe we could have made a better decision.”
Despite the conditions, the manager was delighted with the commitment and determination of his players to hold off the Carlow challenge.
“It doesn’t hide what went on out there. I think both teams deserve massive, massive credit because that was a battle, an absolute slog,” he said. “We just about came out on the right side of it, barely.
“I think on the balance of it we deserved that. I think there was a couple of funny decisions when the pressure came on, questionable at the least, thought some very soft frees.
“I’m so proud of Laois boys. They really had to battle. They dug in and dug in in terrible conditions and we’re safe now.”
At least this win will ease some of the pressure on Brennan when he and his team come up against his former mentor Brian Cody and Kilkenny next Sunday. And the task will not be made any easier with an increasing injury list.
“I don’t know if we’ll have a full 15 of fit lads but the pressure is off we can go and have a go and enjoy that match next week.”