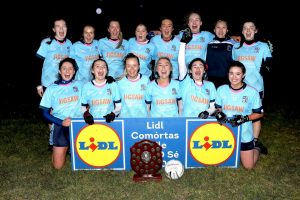 IT was almost fully dark in host club An Ghaeltacht’s GAA grounds in West Kerry as Ballyroan Ladies won the intermediate ladies cup final at the Lidl Comórtas Peile Páidi Ó Sé 2020, where 36 adult men’s and ladies club teams competed in six competitions.
The Laois girls had a whirlwind start against Cavan’s Belturbet Rory O’Moore’s. With a strong wind in their favour, they led 5-3 to 0-2 by half-time but they kept up the pressure in the second half with a stand-out performance from Kate Whelan on route to victory by 6-6 to 0-3.
It was much closer in the semi-final with West Kerry’s Corca Dhuibhne LGFA putting it up to the Laois ladies and it was 1-3 a piece by half-time. There were plenty goals to add to the excitement in the second half and the close tie remained to the end.
A goal from Ballyroan’s Clodagh Dunne five minutes from the end put them a point ahead and so it remained to the end to leave the final score at 4-3 to 5-4.
On the other side of the draw, Araglen Desmonds of Cork accounted for Edinburgh’s Dunedin Connolly’s and Cavan’s Ballymachugh to reach the final.
Ballyroan proved two strong for the Cork side in the final, the third game of the day for both teams winning out on a score line of 5-5 to 1-5.
Comórtas Chairman Pádraig Óg Ó Sé said: “We are thrilled that a Laois side has taken home some silverware. Ballyroan conducted themselves very well on and off the pitch all weekend, taking part in all social activities but yet pushing hard on the field of play on a long day of football. They will automatically get an invitation to defend their title and we look forward to their return.”