Little difficulty for Portlaoise in advancing to round two 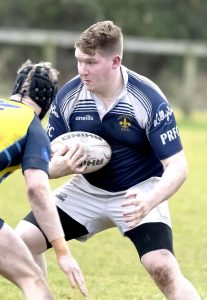 Portlaoise’s Paudie Burke was one of his side’s outstanding players in the defeat of Enniscorthy Photo: Sean Brilly

ENNISCORTHY were crowned Towns Cup winners last season but it was always going to prove difficult to retain the title as they also won promotion to the AIL. And so it proved to be when their second xv faced up to Portlaoise in Enniscorthy on Sunday.
Portlaoise have had something of a topsy turvy league campaign and now have their sights set on the Towns Cup. And that was evident from the start of this game. It may have taking them time to get into their stride but once they did they tore Enniscorthy asunder.
They opened the scoring on ten minutes when John Scully come into the line and put in a delicate kick for winder Mick Dowling to race onto and score. Will Newbolt added the extras.
Enniscorthy did exert some pressure after that and were awarded two penalties but the windy conditions saw both drift wide. Midway through the half Portlaoise won a penalty and Newbolt nailed the kick.
The next try came after the outstanding Diarmuid Joyce was pulled in a line out. From the penalty Portlaoise went through the phases before winger Cormac Doyle picked a dived over the ruck to score, Newbolt again converting.
On the pip of half time scrum half Armand Smit fed out-half Newbolt and his inside pass to centre Simon Williams caught out the home defence and Newbolt’s conversion saw the visitors leading 24-0 at the break, and that was playing into the wind.
Portlaoise didn’t have long to wait to increase their lead. The half was just four minutes old when Enniscorthy made a mess of a line out on their line and Robin Foot pounced to score.
Eight minutes later came the next try. This time full back Scully came into the line and a little show and go saw him score. It was becoming a rout at this stage but full credit to a young Enniscorthy side they did not make it easy for Portlaoise.
Midway into the half Portlaoise made it 41 when the outstanding Ross Cooper broke from the base of a scrum and fed Foot to crash over for his second try. Again Newbolt converted.
Within minutes in a cruel twist of fate Enniscorthy were for one of the few times within striking distance of the Portlaoise line. But a loose pass was pounced on by Smit to race the length of the field and score under the posts, making the conversion handy for Newbolt.
Despite having Shane Reilly yellow carded later in the game Portlaoise still managed to strike for one last try. This time Doyle won possession from a ruck, passed to Scully then went around him to take the return pass and out pace the home defence.
This was a convincing win but Portlaoise will know they face a much stiffer test in the second round when they play Dundalk who are plying their wares in Division 1A of the Leinster league. Portlaoise have home advantage for the game which will be played on Sunday 15 March with a 3pm kick off.