One step forward, two steps back as Laois lose to Kildare 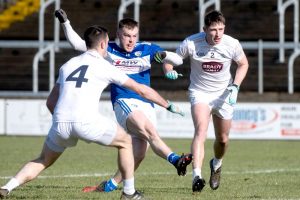 Eoin Lowry (Laois) gets a shot in on goal despite the close attention of two Kildare defenders Photo: Denis Byrne

LAOIS’S dismal run against Kildare continued on Sunday afternoon as the Lillywhites got the better of their neighbours. The scoreboard does Laois some justice as they never looked as if they would get close to Kildare with Kildare hitting 15 wides over the course of the game, 11 in the first half.
This game had scheduled to be played on Saturday evening but due to Storm Jorge, the game was re-fixed for Sunday at 1pm. On the face of it the change did not hamper Kildare who were the better side throughout.
Kildare came into the game needing a win as they sat joint bottom of Division 2 with two just points. They came out showing their eagerness to win as they raced into an early four-point lead after five minutes. Paddy Brophy, Adam Tyrell and two points from Paul Cribbin put Kildare in the driving seat early on.
Laois struggled in the first half to muster up any clear cut chances. It took them until the 14th minute to register their first score courtesy of an Evan O’Carroll free after the Crettyard man had been fouled.
Kildare went straight back up the pitch to reply with a score from midfielder Tommy Moolick. Sean O’Flynn was one of the few star players for Laois on the day and he scored a sumptuous point off his left boot to get Laois’s first score from play.
Kildare pushed on once again and scored three more unanswered points from Niall Kelly, Liam Power and a free from Kevin Feely which left the score at 0-8 to 0-2 after 28 minutes. Even with such a hefty score line, Kildare in fact struggled with the chances they had and ended up racking up 11 wides in the first half.
Mark Timmons had half a goal chance, but his effort was saved by Mark Donnellan, O’Carroll pointed the rebound. O’Carroll was involved yet again as he was fouled, and he converted the resulting free. This left Kildare 0-8 to 0-4 ahead at half-time with Laois lucky to only be four points behind.
Brophy got Kildare going in the second half as he pointed from play. Colm Murphy then spurned a huge goal chance when he was unmarked in the square, however Donnellan was on hand to save his effort. Laois goalkeeper Niall then Corbet stepped up to point a free before Kildare scored a burst of four quick-fire points. Tyrell converted three frees with Kevin Flynn scoring the fourth point in this short burst.
O’Carroll landed his fourth point of the game soon after, his third from frees. Corbet stepped up again and split the posts for his second point of the game.
Brophy got his third point shortly after as the game began to fizzle out with Kildare looking good for the victory. Brian Byrne and John O’Loughlin did point for Laois, but Kildare still ran out five-point winners.
Laois now have a week’s break before back to back away games, firstly against Westmeath with their last league game up in Enniskillen against Fermanagh.