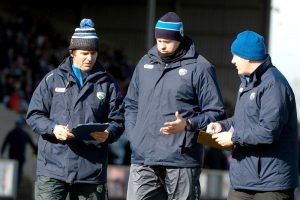 Crunching the stats – Mike Quirke and his backroom team have a look at the stats at half time in MW Hire O’Moore Park on Sunday Photo: Denis Byrne

MANAGER Mike Quirke expressed his disappointment after the game stating honestly that this performance was not good enough to win a Division 2 game especially where points are so hard to come by at times.
“Very disappointing, second home performance in a row that hasn’t been up to scratch,” he said. “It’s not what we were looking for; we’re trying our best to get to seven points and get safe. The performance wasn’t anywhere near good enough to win the game.”
Quirke put the loss down to too many sloppy turnovers resulting in too many scoring chances being wasted.
“I don’t know what we put it down to. We did everything as right we could, and we trained and prepared in similar ways to the games that we’ve won, and we’ve lost. I think it was down to mentality. They (Kildare) needed to win the game far more than we did and you could see that hunger. They were first to every second ball, they were winning breaks and they did very well on our kick-outs. They were tough to break down and they played the conditions and the pitch very well.
“Too many turnovers, we probably had more turnovers than attacks and if you’ve that many turnovers, you’re not going to win too many games. It was just a poor, poor performance. A lot of things we’d be working on and having played well in other games; those things just never came off.”
Quirke is now hoping their away form can continue as they now have a week break before a trip to Mullingar to take on Westmeath.
“We’ve two away games now, it mightn’t be a bad thing. We might have better luck away from O’Moore Park at the moment.”
Kildare got off to a superb start with four points in four minutes and this set the scene for the remainder of the game.
“They did get off to a great start, we knew they were going to come out like that, and they were desperate for the win. They were looking at a situation where if they didn’t win today that they were probably going to go down. Often it’s the team that’s most desperate for the win that comes out on top with that extra bit of hunger. We weathered their storm and we got four points which levelled the second 25 minutes of the half, but that early barrage of points hurt us.
“The scoreboard doesn’t lie, and they were much the better team, it was five-points or ten-points it doesn’t matter. We were the second best team and we didn’t play well. Regardless of what the scoreboard says, we’re under no illusions. We were second best in every department.”
Laois didn’t get many chances at goal, but when they were they weren’t able to take them.
“We had two good goal chances in the first half and if you were to get something out it, maybe things would have been different. We just weren’t good enough, no point saying anything else.”
Quirke is targeting a win in one of the next two games as Laois look to hold their place in Division 2. In doing so, Laois would then be in the Sam Maguire, whereas if you are to be relegated, it’s into the Tailteann Cup, the second-tier competition.
“Whether it’s home or away, we just need to get to seven points and that’s been our focus. Once we get to seven points, we can worry about what comes after that. For now, we have two matches left and we have to pick up two points and get to seven. Once we get to seven, we can’t be touched.”