Dublin finish strongly to inflict more misery on the O’Moores 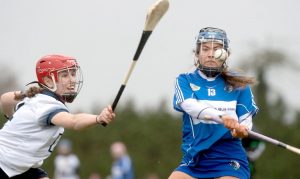 Tara Cole (Laois) gets her shot away despite the attention of Dublin’s Issy Davis Photo: Denis Byrne

CLONAD was the venue on Saturday last for the meeting with Dublin in the Leinster minor championship. A week earlier Laois journeyed to Wexford and, despite being out muscled by the home side, did well but ran out of steam losing by eight points in the end.
On Saturday conditions were dry but an awful wind made it difficult to control the ball. Dublin looked very sharp with Niamh Comerford deadly accurate and she posted an early brace of points despite the fact that the visitors faced the elements in the opening half.
Laois struggled to get out of their own half but when they did they won a hard earned free 30 metres from goal. Andrea Scully stood over the ball and drove a powerful shot goalward. The Dublin keeper and the Laois full forward Emily Duggan clashed for the ball which flew into the top of the Dublin net.
Dublin continued to dominate but their shooting cost them dearly after three excellent points. They were winning a lot of ball but hit four bad wides in quick succession that might have ended the contest.
Laois finished the half the stronger with points from midfielder Grainne Delaney and Andrea Scully (free) leaving the hosts in front 1-2 to 0-3 at the interval.
Dublin came out full of confidence for the second half but in fairness Laois were prepared for the onslaught. After the visitors hit two early wides Laois broke away with Luisne Delaney winning a great ball in midfield and racing past two Dublin defenders. Once inside the Dublin half she fired in a great ball towards the Dublin goal. After her effort was denied Aiva Coss pulled first time and beat the keeper for a well taken goal that shocked the visitors.
However from the puck out Dublin went down field and after the Laois defence failed to clear their lines the Dublin full forward Emily Byrne pulled and the ball hit the net. That goal saw the visitors grow in confidence. The next seven points all went the way of Dublin and in between they hit numerous wides.
The Laois defence performed heroics but could not get the ball down to their attack in the final quarter. Dublin sharp shooter Niamh Comerford, who missed several opportunities, still hit four points from placed balls and an excellent effort from play.
Emily Byrne and substitute Aisling Gannon picked off two great scores but the real harm in the second half was done by right half back Ciara Clohessey who time and time again defied the best efforts of the Laois attack.
With two losses from two outings Laois are now in danger of relegation but this year’s team is not considered near as strong as last year’s which competed in the ‘B’ competition.