Laois team which lost out to Dublin in the Eirgrid Leinster Under-20 Football final at Netwatch Cullen Park on Friday night Photo: Alf Harvey.

TEN points was the winning margin and unfortunately there is no way of disguising the fact that Dublin were well worth their victory. That is not to say that the Laois did not give it every ounce of energy they had in Netwatch Cullen Park on Friday night last.
The fact is that this Dublin side is proof of the players available to teams from the capital. Just a couple of points had separated these sides when they played each other a few years back at under-17 but just two of that team were playing on Friday. Faced with those sort of facts it is hard to see how rural counties can keep pace with Dublin.
On top of that the Dublin lads were bigger physically and always held the edge with their pace and physique.
Laois could not have gotten off to a better start. They took early control landing the three opening points of the game. Ronan Coffey, who played a real captain’s role throughout, converted a close in free to get Laois up and running. A minute later he added his second placed ball following a foul on Darragh Galvin.
With just three minutes in Laois were to haver three on the score after goalkeeper Matthew Byron splits the posts with a free from 50 metres out.
This early onslaught did not unnerve the Dublin lads who soon found their rhythm and were soon to take control. They were to land the next three points and level affairs before Laois could react. And it could have been worse.
Dublin ere beginning to dominate in the middle of the field and this dominance was to be the foundation for their victory.
Wing back Lee Gannon found the target with a long-range effort. Soon after Byron came to Laois’s rescue when reacted smartly to deny Kieran McKeon a goal from point-blank range. Gannon then adding his second before the deadly Ciaran Archer opened his account.
Laois were battling and kept in the game when Byron went up field again to find the target from 45 metres and hand the the lead back to Laois, but they would not score for another 15 minutes while Dublin would rattle off seven points.
Archer converted four frees while further points from Mark Lavin and Sean Foran resulted in Dublin having a six-point lead as half-time approached.
Dublin then came within inches of a goal but corner back Alan Murphy rasper came back off the crossbar two minutes before the break. But instead of just playing out the last couple of minutes Laois went in search of a score and were rewarded when Ronan Coffey ended the scoring drought with a well taken point.
Archer rounded off the scoring for the half with his sixth point of the half leaving Dublin leading with a six-point lead, 0-11 to 0-5. 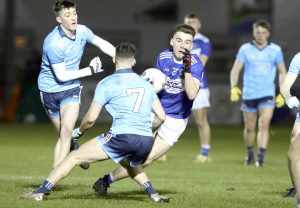 Damon Larkin goes on the attack for Laois against Dublin Photo: Alf Harvey

Laois got the second half off to a good start with Coffey split the posts for his fourth point seconds after the restart.
But Dublin were soon back into their stride with Kieran McKeon and Rory Dwyer pointing to put seven points between the sides 10 minutes in.
Jack Owens pulled one back for Laois at the end of the third quarter and Byron made it three from three placed balls but amazingly this would be Laois’s last score of the final, with Dublin’s McKeon cancelling out that score.
Laois had two late goal chances but they were not availed of. When a short Dublin kick out was won by Jack Owens he moved the ball to Mark Barry who was fouled. The referee pointed to the penalty spot but unfortunately he dragged his effort wide.
McKeon and Archer were to track on further points for Dublin before, with a minute remaining to play, Alex Mohan found himself in on goal but it was not to be.