Mo to the fore as Laois ladies defeat Fermanagh 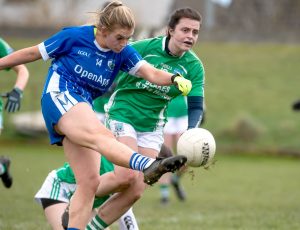 Emma Lawlor lands a score for Laois against Fermanagh in Portarlojngton on Sunday Photo: Denis Byrne

COMING into this game Laois knew that nothing less than a win would suffice is they are to were not to face relegation. Prior to the game in McCann Park, Portarlington on Sunday afternoon Laois were languishing on just four points in the nether regions of the league.
Their opponents, Fermanagh were a point behind so the win was imperative. Laois to their credit and thanks to a masterful display from Mo Nerney secured the win that now sees them mid-table with two game to go in the league
Mind you, they did not have it all their own way as Fermanagh got the game’s scoring underway as Roisin O’Reilly converted two early frees. Laois responded with two frees of their own, Kate Whelan pointing one while Mo Nerney pointed the other.
O’Reilly scored her third point shortly after, once again coming from a free. Laois then rattled off two unanswered scores as Emma Lawlor landed a sumptuous point while Nerney showed her reliability from frees with another score.
Fermanagh ended the half on a high and went into the break two points ahead after Brenda Bannon had scored from play before O’Reilly got her fourth point from frees.
Laois began the second-half with the wind in their back and they knew they needed a big second half to secure the winning points for the league table.
However, they were soon three behind after O’Reilly scored yet another free to began the second-half scoring. Nerney had a goal chance for Laois but was desperately unlucky to see her effort fly narrowly missed the target.
Bot Laois were beginning to find their rhythm and began to kick on and were aided when Fermanagh were reduced to 14 players as Bannon received a yellow card ensuring a ten minute spell off the field.
In those ten minutes, Laois went on to score an incredible eight points. Nerney pointed a free before Emma Lawlor opened her tally as she converted two frees. Nerney added a further four points to her tally with three of them coming from play.
Aine McGovern stopped the Laois onslaught as she pointed from play but there was no stopping Laois now. Nerney would add a further two points from play as she ran the show for Laois in the second half.
Down by five points, Fermanagh stunned Laois with two quick-fire goals to retake the lead. Sarah Jane Jones fired low into the corner before an effort from Aoife Flanagan bounced over Sinead O’Rourke’s head in the Laois goal.
Nerney kicked Laois on again with two more points as she took her tally to a remarkable ten. Meaghan Dunne then fired over the game’s final point ensuring Laois ran out victors by two points.
In their remaining two games Laois play host to second placed Down in two weeks time and finally must travel to bottom placed Sligo the following weekend.