Manager acknowledges Dublin prowess but is so proud of his charges 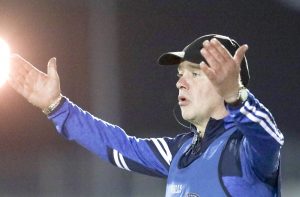 LAOIS manager Eddie Kinsella was full of praise for the victors on Friday night as Dublin got the better of his Laois team in Netwatch Cullen Park. Kinsella felt that the better side won and that they deserve recognition for being such a great side.
“We were second best I’m afraid. We kept at it and stayed going, that’s what we asked them at half-time, just to staying fighting ’till the end,” said Kinsella.
“We got a great start to the match but Dublin were excellent to be fair to them. They were excellent in the tackle, very strong in defence and very powerful how they moved the ball out. No complaints, we were second best, we had a lot of work to do. They were very quick with the ball while I thought we were a bit slow at times coming with the ball.”
Laois started the game superbly as they went ahead by three points. However, an 11 minute period in the first half accounted for eight Dublin scores without reply which left Laois needing a huge second half. The players stuck to their task and never gave up until the final whistle.
“We started really well and then died down and they took over control of the game. We missed a few chances at important times that might have gotten us back into it. The good thing is the lads kept fighting and they never gave up,” said the manager.
Laois had the lion’s share of possession in the second half but were unable to claw back the lead that Dublin had tallied up in the first half. Kinsella credited Dublin’s ability to always score after Laois had scored and he feels that’s the sign of a good team. Laois had their chances in the second period but Mark Barry missed a late penalty while Alex Mohan also had a late effort on goal.
“In the second half when we were trying to get back into it, every time we’d score a point they’d go down the field and do the exact same. That’s a the sign of a good team. We actually did dominate them in the second half but those missed chances, the goal chances as well this things happen on the day,” he said.
Kinsella was proud of the team and the way they applied themselves throughout the game and was immensely proud of the effort that the lads out in from start to finish. He also feels that their clubs and parents should be proud too of such a spirited performance for the 60 minutes. He now wants lads to kick on next year and that if they’re given the chance with the seniors that they take it with open arms.
“I’m proud of these lads for how they stayed at it and never gave up. Tonight was the first time seeing a dry ball, it was like a summer’s evening after the weather conditions we had for the quarter and semi-final. Everyone should be proud of these boys, we have a bit of work to do in regards the strength and conditioning side, we seemed to be not powerful enough and we have to work on that. The lads deserve the credit the way we beat Westmeath and Kildare and the way they stayed at it for the whole game. All their clubs should be proud, their parents should be proud and I myself am very proud of them. They developed a lot and hopefully seven or eight of them can step you to senior next year and that’s what it’s all about.”