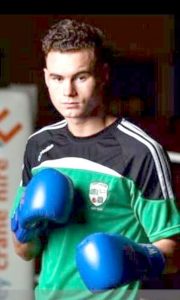 TALENTED Portlaoise middleweight boxer Michael Nevin has been selected to represent Ireland at the upcoming Olympic qualifiers. The qualifiers will take place in London from this Friday 13 March to Wednesday 25 March.
Nevin has been performing extremely well in all the competitions he has participated in. He is undoubtedly one of the most decorated boxers on the team.
Known as the ‘Medal Machine’, he has continuously sustained levels of performances from juvenile to senior elite, winning medals in every grade. He is the only Irish boxer who has won three European gold medals in three different categories – juvenile, junior and youth. He won a bronze medal at the World Youth Championships losing out to the eventual gold medal winner.
At senior level he continues to win big medals at major competition. In the prestigious Eindhoven Cup in Denmark he won the gold medal.
Regarded as one of the best boxers in the country, Nevin won his first major international medal when he reached the semi-finals of the European Games last June. His continued success guarantees him much needed funding from the Government to keep him participating in the sport of amateur boxing.
Michael has undoubtedly grown in stature. He has developed into a world class elite boxer. His performances at the world championships in Ekaterinburg, Russia, outpointing Andre Verme from Moldova and Lithuania’s Vytautas Balsys, were top class and had to be to achieve the results.
These wins set Michael up for a meeting with the Russian number one, Gleb Bakashi in the quarter-finals. Michael gave an absolute top class performance against the Russian and he possibly should have gotten his hand raised. The decision of the judges to give the contest to Russian boxer was not received well by those in attendance. Many thought Nevin had done more than enough to have his hand raised.
Michael’s said after the decision was announced: “I boxed very well. My performance was excellent. I really thought I had enough done to get the decision. It was a great contest. Close, but I thought I won. I will learn from the experience.” An honest and dignified response, from Michael.
Bakashi went on to win the gold medal and become the 2019 world boxing champion. This achievement by the Russian is testament to Nevin’s ability to achieve in this company and copper fastens his position on the world boxing stage.
Nevin’s only losses to date have been to Bakashi and the world number three Herbert Souza from Brazil. Competing against world class opposition of this calibre and getting your hand raised justifies Michael’s position in the world rankings at number nine.
Speaking to Michael’s coach Pat Ryan on his selection he said: “Michael’s lifelong ambition has always been to box in the Olympic Games ever since I met him 12 years ago. He has devoted his entire life, thus far, to boxing.
“His application, sacrifice, commitment and perseverance to be the best boxer is relentless. His ability to work through the difficult and hard times, is commendable. A true sportsman and a gentleman always.
“If Michael gets fair play, I have absolutely no doubt, he will achieve his ambition. Michael is well prepared and has a great team around him at club and at national level. There is only one word to summarize Michael Nevin as a person and as a boxer – class”.