ICA cooks up at storm for Women’s Day

ICA guilds around the county celebrated International Women’s Day with a special get-together in Ballacolla on Monday 9 March.

The event involved members dressing up in the national costume of a foreign country, carrying out research and cooking food from that nation and bring it to the Ballacolla gathering. 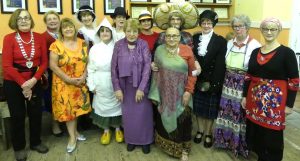 Members of some of the 13 ICA Guilds in Laois who celebrated International Womens Day on Monday 9 March in Ballacolla.

Laois ICA federation president Anne Payne said: “This was the first time that the federation organised such an event and we were delighted with the response from each of the guilds.”