Much success for No Name Club at Super Talent Show

MEMBERS of Portlaoise No Name Club are proudly celebrating their recent success in the organisation’s Super Talent Show in New Ross, Co Wexford.

Two members will be going forward to represent the club in the nationals at the Lime Tree Theatre, Limerick on Saturday 18 April.

The No Name Club is a national voluntary youth organisation that provides young people with an alternative to the pub culture. Its mission is to demonstrate a lifestyle where the use of alcohol and drugs is seen as unnecessary to the enjoyment of a good, happy and cheerful social life.

Currently, some 50 clubs are dotted around the country with more than 1,500 members. 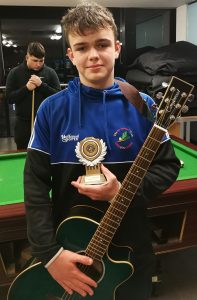 Billy O’Reilly with his trophy

Billy O’Reilly from Portlaoise College won the Solo Musician category with his version of The Irish Rovers’ classic Drunken Sailor, which he belted out on the guitar, despite taking up the instrument only three weeks beforehand.

“It was my first time to be on a stage in front of people. When they announced that I was the winner of the solo musician category, my eyes started filling up with delight. My fellow members were cheering me on … I was shocked. It has made me a much more confident person and I can’t wait to represent the club in the nationals now.” he said.

“While performing, I felt nervous, although my fellow No Name Club members were standing alongside me and supporting my singing, which gifted me with the confidence that I needed to win.” she said.

Elaine Greene, chairperson of Portlaoise No Name Club, said: “We’re so proud of each and every host and hostess in this club. They worked so hard to be ready for the regional talent show.

“It takes real courage to get up on stage especially in front of your peers. As the kids learned on Saturday, it doesn’t matter who you are or where you’re from the audience will shout and roar support for the performer. As the kids told me, that’s a great feeling. It’s not about winning, it’s about building confidence and resilience in our members.” she said.

The No Name Club opens on Monday nights from 7pm to 9pm and is situated above Subway beside Portlaoise Credit Union. New members aged 15 to 18 years are always welcome. The club is currently looking for volunteers who are available during these times. For more information, check out Portlaoise No Name Club on Facebook.