AN expertly forged tax disc was discovered when a driver was stopped at a garda checkpoint in Borris-in Ossory.

The forgery was virtually indistinguishable from a genuine disc but was rumbled when gardaí checked with motor tax databases.

The Volkswagen saloon was seized by gardaí at the checkpoint on Tuesday 7 April. The apparently genuine tax disc was in date until December 2020, but a check with a number of databases confirmed it was a forgery.

Officers on checkpoint duty investigated the driver’s tax and insurance using the garda mobility app, which was introduced early this year and allows them to do a roadside check with a number of different databases. The car was impounded and towed away from the scene.

The Borris-in-Ossory checkpoint, conducted by the Laois Roads Policing Unit, was among a vastly increased number of garda checkpoints around the county due the Covid-19 emergency. 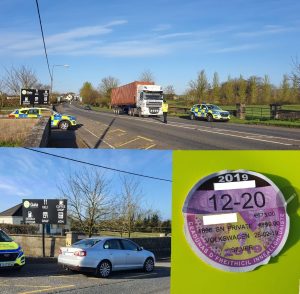