Laois manager: The GAA will have lost nothing in waiting 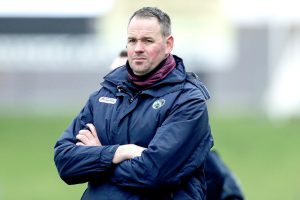 ON April 23, the Minister for Education Joe McHugh stood at a podium and boldly pronounced that the leaving cert exams would go ahead at the end of July. Yesterday, that decision was rowed back with the speed and force of the O’Donovan brothers cutting through the water around Skibbereen.

Covid-19 can do that to you; make you look silly in a hurry if you try to get too far ahead of yourself.

To that end, I find the constant need to ask GAA players and managers what they feel ‘should’ happen into the future in terms of returning to competition about as helpful as getting financial advice from your postman or butcher.

I’d rather stick with them for my mail and meat.

The point is, there are highly qualified people who are experts in their field trying diligently to provide us with the best quality information, advice and reassurance in these hugely worrying times. Just because you’re talented at striker of a sliotar, football, or manager of a team doesn’t qualify you to have a seat at the grown-ups table in this conversation.

Of course, everybody is entitled to their own personal opinion, but all opinions aren’t created equal on this topic.

Last week the government provided us with a ‘roadmap to recovery’; a tentative step by step guide to getting the country back to some kind of normality. While Leo Varadkar’s appearance on The Late Late Show filled in some of the blanks he was duly lambasted for referring to his notes in an attempt to be as accurate as possible when outlining the proposed timeline. Go figure.

While I’m somebody without allegiance to any political party, I can’t say I was overly offended to see the man check his dates in real time rather than bluff his way through the interview with misinformation. When he mentioned the prospect of a GAA championship, it lifted the spirits even further for those of us who get so much joy from the games.

If not a quick fix, the roadmap provided some hope and clarity for everybody. A sliver of light at the end of a long dark tunnel.

Following a conference call between the GAA management committee and the county chairpersons earlier in the week, the association seem to be acting in an even more cautious fashion than the Government’s plan by keeping pitches and facilities on lockdown for an extended period into July.

October has emerged as the most likely month to see the start of an inter-county championship while being preceded by club action. That is, if we see any football or hurling at all.

The truth is, at this point, nobody knows. And for me, I’m perfectly ok with that.

I’m more than happy to play the waiting game and see how things evolve over the next weeks and months. I really can’t fathom the calls for the championship to be scrapped entirely at this point, nor do I agree with those calling for more certainty around when we can get back training.

No more than the Leaving Cert being scrapped yesterday, there can be no confidence in predicting what twists and turns are coming down the tracks.

In Laois, for what it’s worth, we shut down all collective online training nearly two weeks ago, and it will remain that way for now. Not just because of the latest directive from Croke Park, but more so because if we are to play again this season the best-case scenario is that it will be in 5 months time.

Nobody needs to be training for five months for any game.

It should go without saying that conversations with players today are very different to what they were a couple of months ago, they now have very little do with training, gameplay, fitness or skills. Like everybody else, players are concerned for their own health and wellbeing and that of their family, what’s going to happen with their business or employment and all the things that occupy the thoughts of the rest of society.

After the GAA made their latest proclamation this week, despite the inference by some journalists about inter-county managers not being pleased with the decision, I for one had no problem whatsoever with Croke Park taking a more prudent and watchful approach.

Everybody playing GAA does so as an amateur and heads home after training and games to any possible combination of parents, partners, children, or grandparents. Nobody in their right mind would suggest for a minute that it would be appropriate or safe for a member of any club or county team to play a game when the possibility of contracting a highly transmissible virus still exists at a significant level, thus running the risk of bringing into their own home and passing it on to a vulnerable member of their family.

Gaelic football or hurling games, no matter how much we crave them, are simply not worth that type of risk. That should be obvious to everybody.

But to reiterate the point, nobody knows what the profile of this virus will resemble in four to five months’ time. By September we could be facing the possibility of a second wave and GAA games won’t even be a consideration on the horizon. Or perhaps it could go the other way and numbers could be so insignificant in the country as to warrant meaningful discussion with the players to ascertain if there is a real desire to make games happen.

In the absence of any real certainty, I don’t see the problem with waiting it out, listening to the experts and making a definitive call closer to the time based solely on best available information.

While it would be incredibly undesirable for games to go ahead with no supporters in the stadiums, for now at least, it seems the most likely scenario. In one sense, playing big games is all about the relationship between the players and the supporters. Those special moments on the field immediately after victory or defeat with your family, friends and clubmates are priceless, not only for the players of now, but also for inspiring the next generation.

But ultimately, if it’s the only viable alternative as a last resort, with counties live streaming their games, we should at least be open to exploring the possibility down the line, no matter how unpalatable.

For now, we’ll allow players enough space and support to ease their way through this Covid mire, while focusing on more important things than Gaelic games, and if and when the time is right, we’ll prepare as diligently as we can. If that time doesn’t arrive this year, we’ll have lost nothing in waiting.

This is a very fluid and rapidly evolving situation, and with no guaranteed timeline for a vaccine, it will take patience and understanding until we can develop a shared ability to coexist with the virus while finding a way to function in a new normal. What that will look like is still anybody’s guess.

For now, the GAA are just like everybody else, we’ll get back playing games at some point, but we must allow ourselves to be guided by those who have developed expertise in this field, while we also become more comfortable with trading in a new common currency of uncertainty.

This article first appeared in the Irish Examiner