On this day 2011 – Camross maintain push for semi-final place 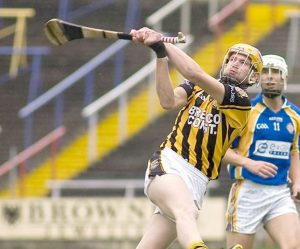 Zane Keenan scored an amazing 2-6 in the defeat of Clough/Ballacoll Photo: Denis Byrne

IT is a long time since Clough/Ballacolla suffered four league defeats. However, while they have bid farewell to the three in a row ACHL division one titles they will not be pressing the alarm buttons just yet.

With these two sides due to meet in the opening game of the championship the home time were content to field several fringe players. On Tuesday last Camross, the team they denied them the double four years ago, were visitors to the Hawthorne and they had already leaked three points. If they were to keep tabs on the chasing pack they could ill afford to drop any more points.

Willie Hyland was back in the club colours after a memorable display with the county team and had just completed his Masters in Limerick. He opened the scoring with a point but three minutes later Zane Keenan hammered the ball past Danny Hanlon in the home goal. Dean Delaney added a point but like scores from Canice Coonan and Damien Bergin reduced the margin to one after 12 minutes.

Camross then enjoyed a purple patch with Andrew Collier pointing twice and Damien Keenan pointed from play before his brother drove a semi-penalty into the roof of the net.

Hyland hit his second point but Camross responded with four in a row from four different players. When the home team were awarded a penalty Hyland blasted past the defence and at half time the visitors were leading 2-11 to 1-4.

John O’Sullivan had stern words for his charges at the interval but lacking real fire power it was going to be difficult to turn things around. Hyland opened the scoring from a free only for Zane Keenan to respond with a point from a 65 almost immediately. Hyland added two more but again Camross had points by Joe Phelan, Zane Keenan and James Doran.

Clough/Ballacolla responded with points by Shane Corby and Hyland but the visitors finished strongly with points by Paul Kavanagh, Joe Phelan and James Doran to maintain their push for a place in the semi-final.

Next time out the home team make the short journey across the Erkina and both need the points while Camross welcome the unbeaten Borris/Kilcotton.