‘It wasn’t the injuries, it was the relentlessness, the pressure’ 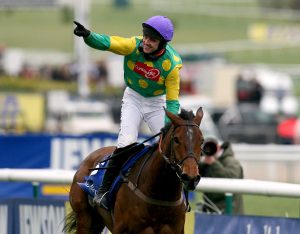 One year on from his retirement, Ruby Walsh talks about the factors which influenced calling time on his decorated career

IT’S hard to believe that a year has passed since Ruby Walsh finally hung up the silks and took his leave from racing. Of course he hasn’t disappeared from the limelight in that time and he has quickly settled into a role as one of the sharpest analysts of the racing game.

With time comes perspective and it was interesting to hear him speak on a recent episode of Paddy Power’s new podcast, From The Horse’s Mouth, about taking the decision to bring to an end one of the most celebrated and decorated careers in the sport.

He says the constant threat of injury did not play a part in that decision.

“No one likes getting injured and no one is going to miss that but I don’t think it was injury that made my decision for me,” he said. “I think it was the relentlessness of it, the pressure of it. What more was there to achieve? Definitely to keep myself agile and moving from the injuries, I was having to work incredibly hard at that to keep the movement in my shoulders and hips. I had to do a lot of work with those. So maybe it was the whole workload that I wanted to change and that I’d had enough of and it probably was that.”

In general, his body has held up well to a long punishing career in the saddle.

“The only injury that’s come any way against me is in my left shoulder,” he said. “Definitely the range I have is quiet restricted compared to the other one, but of all the injuries I’ve had, to end up with restricted movement in one shoulder isn’t too bad.”

After a career spanning 24 years, it was, of course, victory on Kemboy in the Punchestown Gold Cup that proved his swansong.

“I had it in my head that from Kemboy on, if I won a Grade 1 I’d retire so it was great that Kemboy did it. I knew when he landed over the last that Al Boum (Photo) wasn’t going to get to him so I knew that was it. I couldn’t wait to get to the line. I’d had my fill of riding and enjoyed it thoroughly, but I looked forward to the next stage.”

Ruby had the opportunity to ride many of the finest horses of the past two decades on both sides of the Irish Sea because he kept his options open with both Willie Mullins in Carlow and Paul Nicholls in England.

Of course, it was an opportunity that would not be offered to a less talented horseman.

“If you aren’t employed, you can’t be sacked. That was always dad’s advice. You could keep your fingers in many pies and have lots of opportunities. I was offered the job with Paul Nicholls before Timmy Murphy and after Timmy, I was offered it again. But it worked out as a dream scenario in the end where I went back to Paul with what I could do, which was a couple of days a week. That meant I could keep my job with Willie (Mullins) and ride for Paul in England. It was getting your cake and eating it and that’s what I went for.”

Of course, it meant that when the season came to a bottleneck, such as at Cheltenham, things could get very busy indeed.

“Cheltenham and the Grand National were the biggest clashes and then you had the Cheltenham November meeting clashing with the Morgiana meeting. But they were the only big clashes every year.

“You’d be trying to organise it to suit yourself best. I think Master Minded in the Schloer Chase might have clashed with Hurricane Fly in the Morgiana Hurdle and I think I was in Navan the day Denman won in Bangor, but yes there were clashes and at times, I got some calls wrong. If I could have figured out how to ride two horses in one race, it would have made life so much easier,” he laughed.

It wasn’t a concern of Ruby’s that he was cornering so many of the finest horses for himself.

“I’m sure there was resentment amongst other jockeys but I wasn’t aware of it,” he said. “I was operating in two weigh rooms [Ireland and England], probably a lot of the time in isolation really, because I was hopping from one to the other rather than spending time building a strong rapport with anyone in either. But while there may have been some resentment, it didn’t overly bother me. I was more concerned with what I could do and get and achieve for Ruby.”

In that context, it’s particularly interesting that he built up such a rapport with perhaps the only other person in the racing game who could match his winning mentality: Tony McCoy.

“James Nash suggested I ring AP and ask could I stay with him [when racing in England] and I’d definitely say staying with AP and Chanelle made my career in England a hell of a lot easier. We were riding in a lot of the same meetings. Whilst we were competitors on the track, we weren’t really competing for the same rides. I was with Paul and he was riding from Martin Pipe and then JP McManus so there was no crossover. We weren’t robbing rides off each other. I think that made it easier, living with him and having somewhere to call home when I wasn’t at home.”

After a career which spanned in excess of 2,500 winners, including an incredible 59 at Cheltenham alone, he delved into the emotions involved in winning big races.

“It’s almost impossible to put into words how you felt when you won something. Relief and satisfaction. I would say relief was a lot of it, to be honest. In most big occasions, emotions explode out of you. It’s like when a soccer player converts a penalty. Is he delighted with the skill at which he converted the penalty? No, he’s just relieved that the ball has hit the back of the net. It is relief that bursts out of you straight away, so I was relieved that I got to finish my career the way I wanted to, and that I got to do it in the race I hoped I could do it in. Relief, that probably is the best way of describing it.”