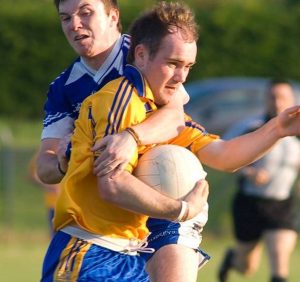 Jamie Doyle was on fire for St Joseph’s in the defeat of Graiguecullen Photo: Denis Byrne

ST Joseph’s turned over a six-point half time deficit to claim an impressive victory over Graiguecullen in the big upset of the weekend. Prior to this game Graiguecullen were sitting pretty at the top of the table while St Joseph’s were languishing at the bottom with only one victory.

At one stage, it seemed the home side were going to pay for some poor score kicking and had found themselves trailing in the wake of a solid if unremarkable Graiguecullen performance.

The introduction of the physically imposing Noel Garvan in midfield at half time married to the imperious free taking of wing forward Paddy Hickey and Trojan work of full forward James Doyle were the ultimate difference. Doyle bagged himself 2-3 in the end and was a constant live wire and threat that Graiguecullen couldn’t get a handle on.

Second half implosions are becoming a habit for this Graiguecullen side and may yet become their trademark. However when you have players in the caliber of the Doran brothers, surely brighter days must lie ahead.

The opening quarter of the game was scrappy with St Joseph’s just edging ahead thanks to superior finishing but not much else. Graiguecullen sought to step things up on 17 minutes when there marauding full back Mark Timmons blasted a goal from 15 metres. Graiguecullen piled on the pressure through points from the Doran brothers leaving the match poised at 1-6 to 0-3 at half time.

Enter Garvan in midfield as he jostled and disrupted the center of the mark much to the exasperation of Graiguecullen. It forced frees and Paddy Hickey was only too happy to convert from any angle that was presented, knocking over four in quick succession.

Doyle grabbed his first goal with a close range effort on 49 minutes, giving his side a two-point lead. Graiguecullen attempted to rally but were put firmly to the sword in the dying embers of the game as a slick counter attacking move saw Doyle net his second.