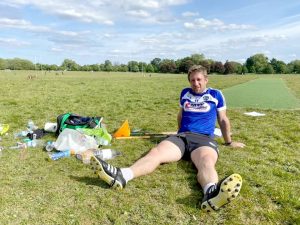 CAHIR Healy completed what many would have considered impossible on Sunday. The Laois GAA dual star took on a gruelling challenge on Sunday in London’s Richmond Park – the aim – to score 2,000 points and cover the distance of a marathon in the space of the day and raising funds for three charities in the process.

For those who know Healy the fact that he completed such a demanding and punishing task will come as no great surprise. Rarely has Laois GAA had a player as committed and dedicated to both club and county as him. For a decade or son he has commuted between London, where he teaches, and Portlaoise to play both football and hurling with the Town and Laois.

And not just that, over the years Cahir has suffered a number of bad injuries but each and every time he just saw these as another challenge to overcome and each time return to play. To overcome these injuries would be tough enough in itself but when this involved working on all the recuperation work alone in London is an example of this man’s determination.

After committing to Laois hurlers for the past number of years, Cahir this year decided to throw in his lot with the county’s footballers. Unfortunately his involvement was all too brief. Back in February in his first start with the footballers in seven years he was forced to depart the pitch in he first half against Clare.

Originally Cahir planned the fundraiser for Do it for Dan campaign. When Do it for Dan reached its target Cahir decided to include the Midlands Regional Hospital in Portlaoise and the NHS. By Sunday evening Cahir’s exploits had raised €16,455.

“After consultation with the Do it for Dan fundraising committee we have decided to cap the money I raise through this fundraiser at £7,500. £7,500 is going to Dan.Thank you so much to everyone who contributed to this in so many different ways,” Cahir said on his fundraisinhg page.

“Any money now raised above £7,500 will be split evenly between the NHS and the Midlands Regional Hospital, Portlaoise PPE appeal. Please keep sharing and getting the message out there. Our frontline services are badly in need of support. Thank you once again for your kindness. I am truly humbled and can not thank you enough.”

“Mindful and respectful of the restrictions currently in place, I have decided to use a rugby goals in a public park in Richmond UK to score 2000 points and run a marathon. I will have 20 sliothars and 20 Gaelic footballs. I will score 1,000 hurling points from 45 metres and 1,000 football points from 21 metres. As there are no nets I will be collecting all the balls myself and running a marathon (42km) in the process. If there are any remaining kilometres to run after I have scored 2,000 points I will run the remaining distance. I will be adhering to all social distancing guidelines at all times,” explained Cahir.

Over nine hours Cahir kicked 1,000 points using both his left and right feet, struck 1,000 hurling points, and in the course of all that covered the distance of a marathon.

All through the fundraiser Cahir’s supporters were kept updated by Facebook video streams at the end of which he said: “I am humbled and blown away by the generosity especially given there’s so many fundraisers going on.”

He also thanked all those who helped him including Laois GAA, London GAA, St Brendan’s GAA club, Sean Dempsey and London GAA chairman John Lacey who is also from Laois.

And as he relaxed after all his exertions he said: “That’s a wrap. Thank you so much to so many people. I will be a while trying to back to everyone. Overwhelmed by the response to be honest.”