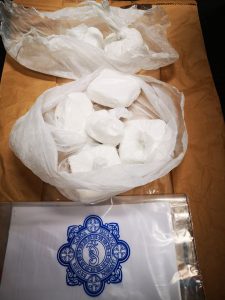 COCAINE worth €117,000 has been found during a search of a van at a garda checkpoint.

Gardaí arrested a man and seized the large quantity of cocaine after stopping the vehicle at a checkpoint on Monday evening.

Gardaí decided to carry out a search of the van under the Misuse of Drugs Act and found approximately 1.7kgs of cocaine.

The van driver was stopped at a routine checkpoint on the Outer Ring Road, Clondalkin, Dublin at about 6pm.

The man, aged in his 30s, was arrested at the scene and taken to Ronanstown Garda Station for questioning in connection with the large drug find. A prosecution is expected to follow.